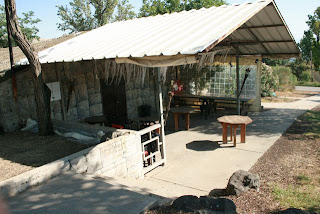 If the dining room is the centre of communal life of the kibbutz—where gossip is traded over meals and decisions debated at general assemblies—then the volunteers’ bar (or “Volly Bar”) was the hub of volunteer life, for better or worse, during my tenure at Kibbutz Shamir. Every Friday evening, after Shabbat dinner, most of the foreign volunteers and a handful of the younger kibbutzniks would gather in the ramshackle cabin to drink too much and get to know each other. There was much craziness and camaraderie, but also some serious sharing and learning, too—at least for a kid from the suburbs of Ottawa, encountering for the first time people of my own age who were living through the geopolitical dramas of our age, rather than just reading about them in the newspaper. My first bar night on Shamir was a revelation.

I don’t think I could begin in my awkward writings to do justice to the events of the last evening, but I must give it a try anyway.

I spent most of the night pulled up at a stool at the volunteers’ bar, quaffing “Goldstar” beers (only 60 agora for a pint—that’s about 2 pints for a Canadian dollar) and chatting with other volunteers. The beer was surprisingly good, relatively light tasting (I think it is 4.8% alcohol) but not like American piss-water beer.

Paul, a South African, and I exchanged stories on a number of topics and common interests including music (he likes Pink Floyd, The Doors, The Grateful Dead, Lynyrd Skynyrd among others as well as despising the throbbing disco music that is apparently played continuously at the bar), sports (he was interested about the Wayne Gretzky trade and how the Oilers were faring), politics (he knew a great deal about the upcoming American and Canadian elections), and travelling (he and a friend had spent 4 months driving across North America in a van).

The most fascinating conversation of the evening, I was just a mediator in. Ali, a young Arab living in an area of the Golan Heights captured from Syria by Israel during the Six Day War, and Paul took turns questioning each other and discussing the tense situations in their respective nations. Paul feels that change is a necessity in his homeland of South Africa, but a slow change, one that he says is already in process, not the violent revolution proposed by Nelson Mandela whom Ali said he respected greatly. Paul does however feel that Mandela should be released as he could cause more damage to the government by becoming a martyr in prison than he could as an old man with his freedom. Ali says, despite living in Israeli territory, he still considers himself a Syrian, though he doesn’t seem to harbour any resentment for the Israelis, as he works beside them, picking fruit for the kibbutz.