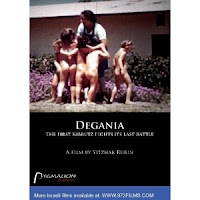 Degania: The First Kibbutz Fights its Last Battle is a documentary with a definite point of view—the film’s bittersweet subtitle should make that clear—like a Michael Moore film without the presence of the lumbering U.S. agent provocateur. It is also a fascinating account of a watershed moment in the 100-year history of the kibbutz movement: the decision by members of Kibbtuz Degania A, the original communal settlement in Israel, to privatize their community in 2007. This news broke internationally, as the world finally took notice of the changes that had been transforming kibbutzim over the previous 20 years. It also became used — by free-market bloggers around the Internet — as the final nail in the rhetorical coffin of socialism.

Yitzhak Rubin’s 56-minute account of the last days of Degania as a fully communal kibbutz begins, curiously, with scenes of American Christians getting baptized along the banks of the Jordan River, not far from where Kibbutz Degania Aleph was founded. The movie then outlines the founding myth and storied history of this influential community (including its vital and valiant role in the War of 1948) through interviews and archival footage. But it soon makes clear that changes are afoot. Despite nearly a hundred years of “From each according to his ability, to each according to his needs” (and relative wealth compared to other kibbutzim), some members and leaders at Degania have been lobbying to alter the fundamental egalitarian structure of their community.
Here, the movie excels at letting viewers play fly-on-the-wall to the heated debates and civil strife caused by the public (and private) debate that precedes the vote to privatize—how it sets brother against brother, friend against friend, neighbour against neighbour. As one anti-privatization member asks, Why do members who want to privatize need to irrevocably change what is unique about Degania, when anyone who wants to live in a private neighbourhood can simply walk out the gates and find a “normal” community like that anywhere in Israel or the world.
Despite the radical origins of Degania, in 2007 its more bourgeois trappings are what make people want to stay: its slowed-down rural life, its sense of family, safety and security, where kids can run free and parents know that someone will bring their children home, amidst a world (and a country) of potential danger and uncertainty. It’s pretty clear that the filmmaker sides with the traditionalists of Degania, but we still get to see the arguments of the other side, led by kibbutz director Shai Shoshany (who I interviewed last year). Even for longtime residents, like Yoya and Alan Shapiro (a daughter of a Degania founder and her American-born husband), the choice is tough: they know that many of the younger members want change or they might leave.
Finally, the filmmaker takes us right into the final pre-vote general assembly before balloting on the proposed initiatives. Shoshany asks Rubin, the director, to wait outside and not film the proceedings, but the canny filmmaker keeps his camera rolling and captures memorable footage of the turbulent back and forth of this all-important historic debate. This is how a dream ends: democratically and divided. (That said, in Degania and other kibbutzim, a vote to change the economic structure of the community requires a super-majority, usually 75 to 80%, rather than 50% plus one.)
In the end, the anti-privatization members lose the vote and must accept the will of their peers. In 2007, Degania introduced differential salaries and other free-market initiatives to their once communal economic structure. When I visited last year, I only had a chance to interview Shai Shoshany, the kibbutz director, so I got little personal sense of how the privatization plans have panned out for the other kibbutzniks. That said, I did come across this interesting news video, shot a year after the vote, which suggests that the Shapiros, originally resistant to the changes, have seen benefits to their community—or at least accepted the inevitability of change.
In any case, this film is a vital document both as a historical record of the first and best-known kibbutz and as an incisive sociological unpacking of how privatization occurs in such democratic communities. It’s well worth watching as Degania marks 100 years since its founding with a year of celebrations and a huge three-day ceremony in early October, when Israeli president Shimon Peres and members of cabinet will visit Degania and help to honour the occasion.
Degania can be purchased or watched as pay-per-view online here. As I was looking for links, I also came across this fascinating footage from 1937 of Degania from the Spielberg Jewish Film Archive. The narration is perhaps typical of its time—a bit over the top—but it makes for fascinating viewing on the centenary of the first kibbutz. Whether it has fought its last battle, I leave up to others to debate…