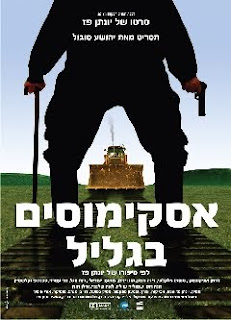 If newspapers write the “first draft of history”, then documentary films offer a more considered, less-hurried and yet still-relevant appraisal of the past. Added to that perspective, the creative world of fiction—whether on the page or the screen—lets readers and audiences see the great themes of modern life through an extra fish-eye lens of the imagination, in which the artist can fill in gaps in (or otherwise distort) the documentary record or use historical events as the backdrop against which invented characters spring to life.

Most of the films about the changes to Israel’s kibbutzim (all made in the last five years) that I’ve watched, reviewed and labeled under the label of “privatization cinema” (or perhaps “cinema shinui” is more accurate) have been documentaries about real people and real places. Not so The Galilee Eskimos—and yet this fictional odyssey, released in 2006, sheds as much light as the other movies on the question of what it means to be a kibbutznik in the year 2010.
I actually watched The Galilee Eskimos last November, before it screened at the Vancouver Jewish Film Festival, but only had a chance to view it again earlier this week. I enjoyed the Israeli-made comedy-drama just as much this time as before…. which is to say, quite a bit. The story is by director-producer Jonathan Paz (whose other films include Zaya and Rakevet Ha’Emek), with a screenplay by Joshua Sobol, one of Israel’s leading playwrights and himself a former member of Kibbutz Shamir. The best way I can describe The Galilee Eskimos is “Cocoon meets The Bad News Bears, with Sten Guns.” Trust me.
The story is simple enough: one morning, a dozen elderly residents wake up to discover that the members of their deeply indebted kibbutz, founded 60 years earlier along the Lebanese border, have abandoned them in the middle of the night and run off. “They left us to die,” laments one of the retirees when they finally realize what has happened, “like the eskimos do.” The only other person is the hired Chinese care-worker, who knows something about how a society can be both communist and capitalist at the same time.
The motley crew of elderly kibbutzniks, half men, half women, are comic exaggerations of different personality types: The flighty children’s house nanny who keeps breaking into song. The feisty ex-army-type who digs up a stash of old weapons and wants to fight the War of Independence again. The lusty couple who were always too bohemian to fall into the bourgeois trap of love—until suddenly it seems too late. The senile oldster haunted by memories of his childhood and a sense of impending doom. The wheelchair-bound filmmaker whose cynicism and thoughts of suicide are balanced by his own nostalgia for the early days of kibbutz life. Together, they quarrel and joke and gossip and still—despite creaking, nearly spent bodies—lust after each other.
Finally, they must come together once more, collectively, when a nefarious developer buys the insolvent kibbutz from the bank and seeks to evict the “Galilee eskimos” so that he can build a casino-resort. There are many funny scenes, including the seniors’ desperate ploy to grow worms as a money-making enterprise, or bathing together in the nearly empty swimming pool, or trying to defend their home with weapons, as one member puts it, “nearly as old as we are”.
The movie is also, in small part, a love note to the power of film itself. A climactic moment comes when the group sits outside to watch four decades of footage shot by Yolek the kibbutz filmmaker: the erection of the first stockade, a long assembly debate about whether private tea kettles would ruin collective life, and then scenes of children playing in the kibbutz, which bring tears to all their eyes as they all weep over the loss of their own children, their own youth, and their own hard-fought-for home. It’s a powerful emotional punch in an otherwise lighthearted film.
Again, I don’t dare give away the ending. The Hollywood plotline that The Galilee Eskimos mostly follows, of underdogs against bullies, usually ends in a clearcut victory for the heroes. But the gravity of changes to kibbutz life in the real world is too strong for such a predictably happy ending in this fictional version. And Jonathan Paz’s film is too honest and original to let its characters—or its audience—off so easily.
Check out the trailer below…