The President on the Kibbutz 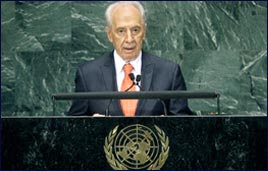 It’s dangerous to have heroes who are politicians, as they have a bad habit of disappointing you. But Shimon Peres, the former Labor leader and current president of Israel, has always stood out to me as a politician with more moral integrity and vision than most—a man who has been forced to make difficult decisions and compromises, and yet has done so without losing his sense of justice.
He recently gave an address at the UN Millennium Development Goals summit. Not surprisingly, he ascribes much of that collective sense of purpose to the time he spent as a young man on a kibbutz. (He lived on Kibbutz Geva and was a founder of Kibbutz Alumot.) As he recalled in his UN speech:

In my youth I was a member of a kibbutz, cultivating poor land. I owned, like all members, two shirts and two pairs of pants. There was a third pair of pants: made of flannel reserved for grooms only. I was lucky to wear them for two full days during my wedding. The main dish in the kibbutz was eggplants. Meat was available once a week, but not every week. There was no private money and little collective money.

We were poor and happy. The sort of happiness felt when a person as is turning desert into garden. Today the kibbutz has a thriving agriculture and a profitable guest house. Food is plentiful. It is in the kibbutz, in scarcity, where I learned to respect pioneers. And developed an affinity to creative minds and laborious hands. Actually, my early dream was to see the world as a great kibbutz. Free, peaceful, productive.