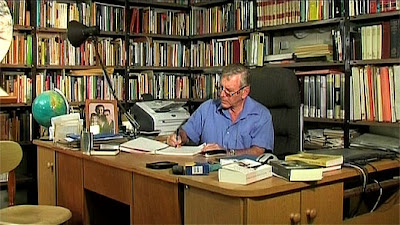 A few nights ago, I watched a DVD I’d ordered, released in 2008 by a Greek production company, that profiled author Amos Oz. It’s a fascinating complement to Oz’s memoir, one that offers insight into both his creative process as well as his thoughts about the historical and even future importance of the kibbutz ideal.
As a writer, I enjoyed the chance to hear the famous novelist talk about his working rituals. How he wakes early and goes for a brisk half-hour walk in the desert, near his home in Arad, around 5 or 5:30 am, before settling down at his basement desk to write, in longhand, until noon or one. Then, after lunch and a siesta, he explained, “I come back and destroy what I’ve done before.” To maintain the flow of his process, though, he tries to end each writing day in the middle of a sentence, which he can then complete and continue the next morning.
“I am a domestic writer,” said Oz, one who is interested in exploring the family—”the most mysterious institution in the world.” “I don’t begin a novel with an idea,” he continued. “I begin a novel with a character. I hear voices. … The first sentence is the most difficult. Where does the story begin?… It’s like beginning relationship with a total stranger.”
He keeps two pens on his desk. One is black; the other, blue. “One is to tell the government to go to hell,” he said, with a smile. The other—the blue, I have to assume—he reserves for his storytelling, with  its ambiguities and ambivalence, without the rhetorical certainty of his political prose. Those two sides of the writer, he feels, need to be separated. Still, his novels may serve a social good, even if that’s not why they are explicitly written. “We learn about the internal life of the Other,” said Oz about the function of literature. “And [through reading] there is a certain chance that we might become better neighbours.”
Late in the documentary, he offered a humorous summary of his 32 years as a member of Kibbutz Hulda. How he had rebelled against his conservative father, at the age of 15, by running away to the kibbutz. How—speaking the elevated language of a boy raised in the city by polyglot Europhiles—he came across as a”funny bird” to the more rough-hewn kibbutzniks.
“I had a tough time integrating with the local society,” he recalled, “because they were tough farm boys and beautiful farm girls.”
How, as he began his career as a young writer in his 20s, he asked the kibbutz for a day, free from the work rotation, to focus on his creative output. How the membership had to debate this proposal in the general assembly and finally vote yes or no. (To their credit, the kibbutzniks granted Oz his day of writing—and then more time as his reputation and sales grew.) How, once he became a source of revenue as an author, the kibbutz authorities even offered him the help of two elderly members “to increase production”, as though his novels and stories were like factory widgets that could be manufactured with greater economies of scale. How, when he needed seclusion to finish a book, he would simply make a request to the kibbutz secretary and be granted money to pay for a quiet hotel room away from the community. And how, once he had to relocate from the kibbutz to Arad because of his youngest son’s severe asthma, he “lost that sense of a big family.”
It’s significant, I think, that the documentary ends with a long monologue from Oz, narrated over a silhouette of the author walking through the last light of a desert dusk, about the fall and rise of the kibbutz:

“The kibbutz movement is in a big crisis. Part of this is an external crisis resulting from the fact that socialism is not popular anywhere in the world. I believe for some people there will always be an attraction in a way of life that is like an extended family, where people share everything, where people carry the highest degree of mutual responsibility. In terms of human experience, for me, as an individual, as a writer, it’s like the best university I ever attended. I hope and believe that the kibbutz will have a revival… Maybe in another time. Maybe in a different country. We live now in a world where people work harder than they should work, in order to make more money than they need, in order to buy things they don’t really want, in order to impress people they don’t really like. This leads to a certain reaction, and this reaction will bring back some kind of voluntary collective experience.”