Growing Up Canuck: or Bibi and the Bieb 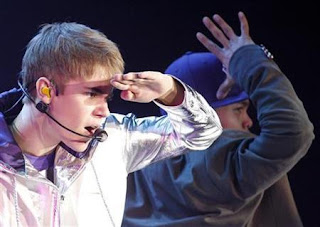 “How many Canadians does it take to change a light-bulb?” I was once asked by a German volunteer, while living on the kibbutz.
I shrugged my ignorance.
“Two,” he explained. “One to screw in the light-bulb, and the other to point and say, ‘Hey, did you know he’s a Canadian?’”
Even today, 22 years later, I cringe at the memory. The German jokester had hit the mark: Canadians pride ourselves on a lack of pride, a sense of humility in contrast to the chest-beating patriotism of our noisy neighbours to the south. But it’s a thin facade, a defense mechanism that hides a more general anxiety about who we really are as a people, as a country. As the recent Winter Olympics proved, or the maple-leaf stitched into backpack of nearly every young Canuck abroad, we still cling to the fragments of a evanescent national identity.
And as my German friend knew, that nervous tic often manifests itself, when amongst foreign travellers, in the odd parlour game known as “Did You Know They’re Canadian?” On the kibbutz, my next-door neighbour—one of several other token Canucks—played it often. When the subject of our country came up, he would cite the North of 49 heritage of various B-list North American celebrities and pop stars (this was the pre-Celine-Dion era) that his European interlocutors only had a vague recollection of: “Did you know that William Shatner is Canadian? And Michael J. Fox, too. And Bryan Adams and Wayne Gretzky.”
Such trivia rarely impressed the citizens of more established nations, cultures that had bestowed upon the world the likes of Shakespeare and Van Gogh, Beethoven and Chopin, Flaubert and Michaelangelo. When I first met Kurt, a longtime volunteer and a social worker from Vienna, I promptly exposed my superficial knowledge of his country: “Austria—just like Arnold Schwartzenegger!” His smile dropped. “He’s not Austrian,” came the reply. “He’s American.” He clearly didn’t indulge in the “Did You Know They’re Austrian” version of the game.
That joke came back to me again this week in the wake of Israel’s “Bieber-Gate”. The news: Justin Bieber, now the world’s most-famous Canadian (whether anyone over the age of 16 is willing to admit it), has been visiting Israel for a concert. The event, in itself, is a point of controversy. Every major artist booked to perform in Israel gets targeted by the Boycotts, Divestment, Sanctions movement, which encourages performers not to play, as a protest of the ongoing occupation of the West Bank and Gaza Strip. Some like Elvis Costello back out; some, like his Canadian wife Diana Krall, still come. And others, like Pink Floyd’s Roger Waters, are forced into a compromise—in his case, playing on the “neutral grounds” of Neve-Shalom and later touring (and condemning) the “separation fence” constructed between Israel proper and the West Bank.

Needless to say, bubble-gum pop Christian teeny-bop crooner (and recent memoirist) J-Bieb isn’t the most political musician out there. But he still got drawn into the quagmire of Mid-East debate when he was invited to meet with Israeli P.M. Benyamin Netanyahu (known in Israel as “Bibi”), and then (according to some reports) balked when the P.M.’s office arranged for young Justin to meet with Israeli kids who lived in towns under assault by rockets and mortars  from Gaza. Amid the P.R. fallout, various versions of events emerged: Bieber (or more likely his many handlers) didn’t want his tour politicized; the meeting was never a done deal; he was just over-extended from paparazzi harassment; he had already invited kids from rocket-targeted Sderot to his show; etc..

Amid the recent violence and unrest in Israel, Bieber-Gate was a relatively brief and harmless media tempest. Nobody has been injured, not even by the ravenous hordes of young Bieb groupies trailing his tour as though he were the Messiah. But it was a reminder that, in Israel, everything is political.
And as several online commenters pointed out, amid the typical tit-for-tat flame wars about the political stalemate in Israel/Palestine: “Did you know Justin Bieber is Canadian?”
That’s a light-bulb I’d prefer we’d keep dimmed.