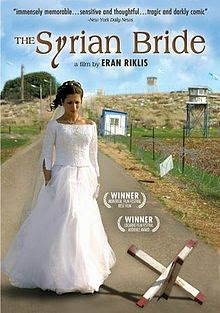 It’s not every day that the village of Majdal Shams gets mentioned on the front page of Canada’s national newspaper. (Actually, other than this Monday, it’s probably been never.) Oddly enough, I was thinking a lot about Majdal Shams last week, even before the news that hundreds of Palestinian refugees had marched from Syria, crossed the no-man’s land that divides that country and the Israeli-occupied Golan Heights, climbed over the “Shouting Fence” and embraced villagers on the other side—before most were dispersed and chased back to Syria by the Israeli army. (At least one of these demonstrators was killed during the clash.)
I had been reviewing video and audio recordings of my visit last summer to Majdal Shams, a village on the slopes of Mt. Hermon, and drafting a chapter about the activists and artists and citizens I’d met there, as well as memories of working (and drinking) with some of the Druze labourers from Majdal Shams who were hired to help in the apple orchards of Kibbutz Shamir. I had also borrowed the library a DVD of The Syrian Bride, a 2004 film by an Israeli director and Palestinian screenwriter set in the town. I’d been told last summer that this fictional tale had been inspired by a real family and real events in Majdal Shams. I finally got a chance to watch it last night.

It’s well worth the time, especially for anyone interested in the complex sociopolitical dynamics of this part of the world, especially for anyone who wants to learn about the Druze and their strange Limbo status in the Golan.
Who or what are the Druze? They are Arabs living mostly in Lebanon, Syria and Israel. Their religion is an outgrowth of Ismaili Islam—a splinter off a splinter of the Muslim faith. It’s also highly secretive in its beliefs and practices. Even among believers, there are “initiates” who can learn its tenets and others that can’t. They are not even considered Muslim by many Sunni Muslims. In Israel, they mostly live in the western Galilee: they volunteer in the army, they elect politicians to Parliament, they are full citizens of the nation. (Fun fact: the most famous Druze in the U.S. is Casey Kasem, the Top 40 music personality.)
In the Golan Heights, their situation is different. The 20,000 or so Druze there live in four villages; Majdal Shams is the largest. Many Druze fled from the Golan for Syria, in 1967, after Israel conquered this strategically located plateau (from which Syrian soldiers often took potshots at kibbutzim in the Hula Valley, like Shamir). In 1981, Israel annexed the Golan and extended Israeli citizenship to the remaining esidents, but that declaration has never been accepted by Syria or other nations, and most of the Golani Druze refuse to take up this offer of citizenship. Instead, as the opening of The Syrian Bride explains, their nationality is listed as “undefined”… which can make life tricky.
Druze families have been separated from each other for 40 years now. In Majdal Shams, on the edge of town, they meet on either side of the two fences that define the no man’s land between Israel and Syria (which was breached in the recent protests) and call across to each other using megaphones. Because of this practice, the location became known as The Shouting Hill or (as I heard it) The Shouting Fence. Some Druze prefer to call it the Valley of Tears. These days, such visits are less common, as people can communicate via the Internet or cellphone, or meet in neighbouring Jordan.
The film is fascinating as it explores different tensions within one family in the town. Mona, the bride, is marrying a Syrian Druze actor from Damascus, who she will meet for the first time when she crosses the border from Israel—and exchanges one passport for another, never to be allowed to return to see her family. (Mona is played by Clara Khoury, who also appears in the hilarious and pointed Israeli sitcom Arab Labor.) Her father, Hammed, is a political activist and local leader, recently jailed, who faces a return to prison if he breaks parole and visits the restricted border to see his daughter off.  One brother, Hattem, has become an outcast from their father (and the religious leaders of his community) because he married a Russian woman and lives abroad. Mona’s older sister (the movie’s main focus) is caught in a loveless marriage with a well-meaning but traditional Druze husband who can’t understand her independent streak. (And their teenaged daughter is having a briefly described Romeo & Juliet affair with a young Druze man whose father, an Israeli collaborator, has “disgraced” his family.)
The slow pace of the film reunites the family members as they prepare for Mona’s wedding and departure, and the final Kafkaesque bureaucratic hurdles, on both sides of her divided community, keeping her from an uncertain new life in Syria. (A life that would seem even more uncertain now, given the recent violence and unrest there.) In the end, it’s a story about the fences that divide families as well as nations. And it’s well worth watching.