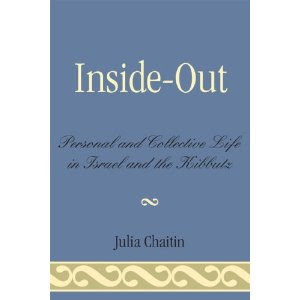 One of the things I love about researching a book or an article are the serendipitous encounters and discoveries along the way. One good example: last year, on my research trip to Israel, I made plans to visit Kibbutz Urim, in the Negev Desert, on the slightest of pretexts. Jerry, my guide and translator, had been conceived on Urim—his parents’ kibbutz—and so we made contact with the new general secretary there, on a whim, and he offered to put us up for a few nights. It was a convenient spot to visit nearby Sderot, where we would be interviewing one of the founders of Kibbutz Migvan.
Then, after a bit of Googling, I stumbled across weblinks, protest letters and academic articles by Julia Chaitin, an Israeli professor working on peace and social justice issues, who also collaborates with some of the activists at Kibbutz Migvan. Coincidentally, she lives on Urim. I decided to set up a meeting, and we interviewed her in her and her husband’s apartment on the kibbutz. It was a wide-ranging, fascinating and convivial conversation, after which Chaitin gave me a copy of her latest book, Inside-Out: Personal and Collective Life in Israel and the Kibbutz.

Last week, I finally had time to read it, and it offers wonderful insight into the tensions within her country and her community, from the perspective of a deeply curious insider. Chaitin describes her book as an “autoethnography”, a term I’ve only come across once or twice. In it, she takes the analytical skills she developed as a social scientist (she has a B.A. in behavioural sciences, an M.A. in organizational psychology, and a PhD in social psychology, all from Ben Gurion University of the Negev) and applies them to untangling and examining the different threads of her own life history, her sense of place, and its connection to her many-layered identity.
She charts her journey from the U.S. (born in New York, raised in Detroit to secular parents deeply involved in the Jewish community) to Israel (to which she immigrated, as a committed Zionist, in 1972) and then to some place in between (she taught in the States, while returning to live in Israel between terms). “Other than steadfastly holding on to my Jewish identity,” she writes in the Introduction, “I am now questioning (on a daily basis) if I am Israeli, American, a kibbutznikit (a kibbutz member), or a Zionist.”
In each of 15 short chapters, Chaitin circles themes or moments from her life experience—a visit to her son’s army base, an academic symposium about Holocaust trauma (one of her areas of study), conflicts on her kibbutz about cows and parking spaces—and finds in them all symbols of her community, her country, and her sometimes ambivalent relationship to both. Her observations are often both comic and insightful, as when she mentions her bouts of “labyrinthitis”—an inner-ear inflammation that affects her balance—and then suggests that perhaps Israel “is also suffering from recurring and long-term labyrinthitis”… which might explain why the path to peace seems like an endless maze. “Kibbutz cars are always dirty,” she observes in another wry aside, “it’s just a matter of degree.” (As a member of a car-share co-op, I know what she’s talking about, although I’m likely more a culprit than victim.)
As a non-Hebrew speaker, I appreciated (and learned from) how she peppered the memoir with key words and their English translations, including kibbutz terminology like chalutzim (pioneers), mitapelet (child caretaker or nanny, the job she did before going to university), bnei meshek or bnei kibbutz (children of the kibbutz, who have the highest social status), vatikim (elderly members or kibbutz founders, who are similarly honoured), ovedet chutz (an outside worker—a job situation that brings Chaitin into conflict with her own kibbutz), aziva (leaving the kibbutz), toshavim (non-member residents, an increasing category) and asepha (the general assembly, where key issues are decided in a democratic vote), as well as lingo peculiar to Israeli society and its circumstances, such as Nut-bug (shorthand for Ben-Gurion airport), aliyah and yirida (immigration to and emigration from Israel, literally, “rising” or “descending”), kibbush (the Occupation) of the shtachim (Territories) and the sarbanim (refusesnik soldiers) unwilling to serve there on their mi’luim (reserve duty), yafei nefesh (“gentle souls”—a right-wing jibe at dovish peaceniks), the bitter conflict between dati’im (religious) and chilonim (secular) Israelis, and the fear (especially after the assassination of Prime Minister Rabin) that it might explode into a Jewish milchemet ezrachim (civil war).
The book reaches its climax with an ultimatum. After several terms teaching abroad, Chaitin is confronted by the mazkir (or head) of her kibbutz and forced to make a decision: Choose between her academic job or her continued membership as a full kibbutznik—a chaverat kibbutz. In the end, it’s an easy choice. Chaitin will keep her academic career, give up kibbutz membership, and become instead an eshet chaver, a wife of a member, without full rights and privileges. (Interestingly, Urim at the time was still communal—and is only now considering shinui or “privatization” changes—so the social conflict didn’t arise, as it has on other kibbutzim, from the economic pressures of privatization.)
“I see our kibbutz as having become ideologically bankrupt while remaining a bureaucratic nightmare,” Chaitin writes. “For years I have not had the sense of brotherhood or of equality or of justice or of the kibbutz being a light unto the other segments of Israeli society—the reasons why I so wanted to become a kibbutz member in my youth, and as kibbutz life was conceived in its early and formative years.” In her most melancholy note, she admits: “All I have is an empty space where my love for the kibbutz used to be strong.”
But she also admits that, in the end, the kibbutz helped her realize which elements of her identity are more important than others. While she laments the lost ideals of the original kibbutz, she can now devote her energies to the causes once championed by the movement. And her own daughter has joined an urban commune in Tel Aviv, carrying on the traditions of social justice and community engagement in a new way. The kibbutz is dead; long live the kibbutz.
But saying goodbye is never easy… not to a sense of identity, nor a sense of place. In the final chapter, Chaitin links her own personal dilemmas to much larger general conflicts over land and belonging: specifically, the Jewish settlers who were forcibly removed from nearby Gaza in 2005 and the Palestinian refugees who, generations later, still carry keys to homes in Israel that many have never seen and that often no longer even exist. In each case, these people—and Chaitin herself—have been told that their home is no longer their home. But what does that mean?
“I also know that belonging and identity cannot be mandated from above, from the outside, by another,” Chaitin concludes. “We—Israelis, Palestinians, kibbutz committees, and I—must learn to find a definition of home and belonging that does not exclude the other. … For while one’s sense of identity and belongingness may be complex, and even contradictory at times, our identities and homes are intertwined, and these knots will not be unraveled.”