Book: The Volunteer: A Canadian’s Secret Life in the Mossad 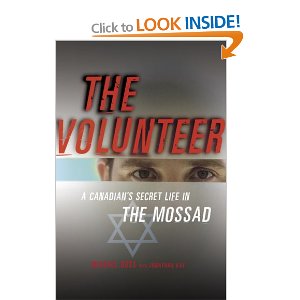 I’m likely the only reader of Michael Ross’s memoir, The Volunteer, who wished he had written more about his life on a kibbutz. I’m sure his co-author, his agent, his editor, and just about everybody who bought his book wanted him to skip quickly through his two years of kibbutz life and get down to the juicy details: the too-amazing-to-be-fiction story of how an Anglican kid from the suburbs of the Canadian West Coast ended up as a secret-agent fighting terrorists for Israel’s legendary Mossad.
Ross arrived in Israel, in 1982, like many young backpackers. He had tramped through London, Paris, Rome and other European towns, and as winter approached, he was looking for warmer climes. He had heard vague rumours about how you could work and live on communal farms in Israel, so he arrived at the offices of the kibbutz movement in Tel Aviv (on Hayarkon Street at the time) and got assigned to a kibbutz (unnamed in his memoir) in the Bet Shean Valley.
Ross was less typical than other backpackers in that he wasn’t just taking time off from work or university studies but had just done three tough years in the Canadian armed forces—part of a long family tradition of military service. He found much to admire in the sturdy, martial character of the kibbutzniks: “Though they always comprised a small percentage of Israeli society,” he writes, “kibbutzniks formed the core of Israel’s founding warrior class—once staffing as much as eighty per cent of the country’s top military jobs. To this day, whole special forces units are still composed of kibbutzniks. Getting up early, working the land, camping, and hiking were activities kibbutz children did practically from the cradle. They were tough and self-confident, and they knew how to work as part of a team.”
As many volunteers do, Ross found himself drawn to Jerusalem on his days off, where he experienced a mild case of what’s often called the “Jerusalem Syndrome”—an awakening of faith in the presence of so much religious history and reverence. “I was barely an adult at the time, at the stage in life when many of us begin to look for meaning—something beyond the quest for girls and peer-group acceptance that dominates the teenage years,” he writes. “Looking back, perhaps it was fate that I found myself in Israel at this impressionable time of life. … As I traversed the country and drank in more of its history, I began to feel the stirrings of spiritual interest in Judaism, I felt something of a political awakening as well.”
His Road to Damascus moment came on a bus from Haifa, when he noticed the arm of the old man in the next seat and recognized the tattooed numbers of a Holocaust survivor. “At a time when I needed direction in my life,” Ross realized, “it awoke in me a reflexive need to protect and defend those who cannot protect themselves.”

He had other reasons for wanting to stay. While out walking a kibbutz dog, he would encounter and chat up another attractive dog-walker, a kibbutznik who eventually became his wife. The kibbutz leaders helped to arrange an Orthodox conversion program, and for the next year, Ross lived on a religious kibbutz and studied Judaism until he passed the rigorous set of written and oral exams set by the Chief Rabbinate (only three of the original 28 students to complete the program). Soon after, he was granted Israeli citizenship, became a father, and (at age 24) began his mandatory service in the Israeli Defense Force. (That’s all summarized in chapter 1.)
After his service (which includes a tense ambush of Hezbollah operatives in southern Lebanon), Ross returned to the kibbutz, where he received a mysterious invitation from an enigmatic government agency. After a couple interviews, some hesitation, a brief return to Canada, and a Byzantine series of training tests, Ross decided to go down the rabbit hole and enter the high-stakes and highly secretive world of the Mossad. The narrative of his training, missions and colleagues, overseas and at Mossad headquarters, forms the the bulk of his memoir—and is what most readers will keep flipping the pages to learn more about. Like many agents, Ross eventually tired of the stress, the long hours, the endless travel and the all-consuming secrecy. He resigned from the Mossad and was in the midst of training his replacement when the attacks of 9/11 occurred. For the previous 12 years, he had been a close witness to the growing threat of fundamentalist Islamic terror groups, but no one—not even the Mossad—had predicted the attack on the Twin Towers.
His marriage over, his job done, his aging father in decline, Ross experienced what he describes as “your standard and banal midlife crisis—compounded by the not-so-standard occupational stress that goes along with the spy trade.” He also missed Canada, now that his “romantic attachment” to Israel, while not over, had weakened due to (in his words) “the endless traffic jams, the scorching heat, the low wages, and the confiscatory tax rates.” All that, and the perpetual threat of another terror attack. In 2001, he returned to Victoria, where he lives and works and occasionally writes for The National Post.
There is plenty to be gleaned about geopolitics, the face of Islamic militancy, and the complexities of life in Israel from Ross’s memoir. (While Ross is purposefully circumspect about many details of his missions, Mossad agents aren’t supposed to go pubic, and the publication of his memoir stirred some controversy in Israel.) But I was most fascinated by it as an account of a young Canadian who went to a kibbutz in the 80s (like myself) but was then drawn deeper than almost any non-Jewish immigrant to the nation into the heart of the culture and the conflict. A story from someone who understood the idea of being a “volunteer” as more than just a temporary lark, but rather as a calling, a duty, an act of self-sacrifice for a greater cause.

The Volunteer: A Canadian’s Secret Life in the Mossad, by Michael Ross (with Jonathan Kay), McClelland & Stewart, Toronto, 2007.