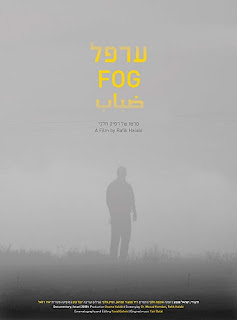 It’s been several weeks since I watched Fog, an hour-long documentary film from 2008 by director Rafik Halabi, and yet I remain haunted by its story, as though I’d been immersed in an epic novel or dramatic film. What I mean is that Fog, a fact-based foreign video project made on what was likely a tiny budget, has all the elements of great literature and art: War! Death! Family! Spirituality! Mystery! And a relentless quest for the truth. It is also one of those true stories that seems, on its surface, so preposterous that it has to be the work of fiction and fantasy.
The fog of the film’s title is the mist that wraps the slopes of Mt. Hermon, on the disputed border between Israel and Syria, into which Sergeant Mu’in Halabi, a Druze Arab soldier in the Israeli Defence Forces from Western Galilee, disappears during the early days of the October War of 1973. It’s the last that his three army companions see of Halabi during an abortive assault on the Syrian-held summit. Weeks later, army officials report to his family that his body has been found, with its eyes gouged out, but it is in an advanced state of decomposition and rapidly buried.
Later, a girl from his village claims to have heard his voice in a radio broadcast from Syria. Might he have been captured and still be alive instead? The story grows more complicated when a four-year-old Druze boy, who had been born just a month after Halabi’s disappearance in a nearby village, reveals striking knowledge of the details of the soldier’s disappearance, as though he had been there, and claims to be the reincarnation of Mu’in Halabi. The Druze religion, a highly secretive outgrowth of Ismaili Islam, includes reincarnation as one of its beliefs. Even largely secular members of the Druze people don’t discount the possibility of being reborn in another body.
At age 22, Roni Ganam, the boy who claimed to be the reincarnated Halabi, has grown up to be a local soccer star, but is killed during his own army service, when his bus is destroyed by a suicide bomber. Again, not long after this tragedy, a new child is born, who reveals, a few years later, intimate knowledge about Roni’s life and sudden death. Has the spirit of Mu’in Halabi found a new incarnation? What seems undeniable is the consolation that the family members of both deceased soldiers take in their faith that their lost boys live on in another embodiment—that death is but a transition into a new life.
Enter Rafik Halabi, a veteran Druze TV news reporter (and author of The West Bank Story), who sets out as the director of this investigative documentary to pick through the evidence, disentangle the varying accounts of Halabi’s last hours and try to reach the truth—but who only finds himself drawn deeper into the mystery. By the end, the documentary sheds new light on what likely happened in the mists of Mt. Hermon, and yet still leaves the viewer looking through shades of ambiguity, too.
I’d ordered Fog mostly because I’d worked with several young Druze on Kibbutz Shamir and finally visited Majdal Shams last summer. The Druze seem to symbolize the immense complexity of life in Israel, which often gets lost in black-and-white accounts we receive in the North American media, let alone the one-sided pro-Israel or pro-Palestine rhetoric that divides the blogosphere and Internet comment boards.
Mu’in Halabi, from Western Galilee, was a Druze Arab and an Israeli citizen and a soldier in the IDF. In the October War, he was fighting against Syrian army units that would have also included Druze soldiers, loyal to Syria. They were fighting over the captured territory of the Golan Heights, where the Druze residents—after centuries of being a minority caught between major powers—are careful to hedge their allegiances. They now live in land that was formerly Syrian, but has been annexed by Israel, but could one day (however unlikely) be returned to Syria. Confused yet? There is little wonder that the Druze religion, and even society, has clung to secrecy (and a belief in the eternal cycle of reincarnation) as a survival mechanism. Fog is both a metaphor and a way of life.
So what’s the kibbutz connection to this fascinating documentary? Okay, beyond my rubbing shoulders with Druze guest workers on Shamir, it’s pretty minor. But there is one: the sumptuous, moving and note-perfect score was written and performed by Yair Dalal, a well-known Israeli musician of Iraqi background (known especially for his oud playing) and peace activist who lived during his thirties on Kibbutz Samar (where encounters with Bedouin musicians sent him off on new artistic directions).
In short, Fog is one real-life tale of death, life and mystery that is worth getting lost in.