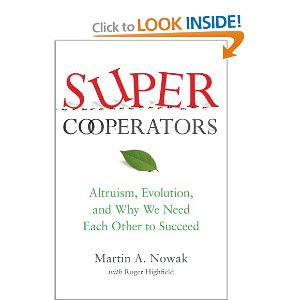 One of the knocks against the kibbutz philosophy, from critics, was that its communal economy was “unnatural”. Evolution, they argued, didn’t breed self-interested Homo sapiens to be self-sacrificing Homo kibbutzniks. Natural selection would never favour a genetic predisposition to help others first. That, at least, was the position of “social Darwinism”—the (often crude) application of evolutionary biology (and what Herbert Spencer called “survival of the fittest”) to understanding human society. Competition—at the level of the individual, the species or the “selfish gene”—must underpin the process of evolution.
There’s one catch. Human societies are based, to greater and lesser degrees, on cooperation—on what Peter Kropotkin, the biologist-cum-anarchist, called “mutual aid”. So, too, are many non-human species, from apes to ants. In fact, every multicellular organism is the result, at a basic level, of cooperation among specialized cellular mechanisms working together to create a more powerful whole. So how do scientists make these real-world acts of cooperation gibe with the Darwinian theory of natural selection?
A recent book called SuperCooperators: Altruism, Evolution, and Why We Need Each Other to Succeed offers a thorough and engaging overview of the subject, as well as a strong case for how cooperation is a key component of the evolutionary process. It’s written by Austrian-born mathematical biologist Martin A. Nowak (in cooperation with science journalist Roger Highfield), an intimidating super-brain who has been on the faculty of Oxford, Harvard and Princeton, and has collaborated with a wide range of leading academics and bright up-and-comers to apply the tools of “game theory” to understand how different cooperative strategies might evolve. (Check out a YouTube video of him here.)
He begins with a look at the “Prisoner’s Dilemma”—a game-theory exercise that poses an obstacle to cooperation. In the Prisoner’s Dilemma (much like the Tragedy of the Commons), “rational” self-interested players will choose to forgo cooperation, even when it would ultimately benefit them more. To encourage the “irrational” choice to cooperate, notes Nowak, “natural selection needs help”. He identifies the five mechanisms that can, under certain conditions, encourage cooperation—and notes that only human beings can access all five.
For a long time, the mechanism of “kin selection” (or “inclusive fitness”) was thought to explain away altruism: organisms cooperate so that their “selfish genes” can replicate either through themselves or close relations that carry the same genes, too. Altruism, in this view, is just selfishness at the genetic level. Nowak argues that kin selection, though, only applies to a select number of situations.
A second mechanism is—most obviously—”direct reciprocity” or “repetition” (known in game theory as “tit for tat”), wherein individuals might cooperate if it’s likely that they will meet again and reap the benefit of a favour in return. A third mechanism involves the extension of reciprocity from direct to indirect via a reputation economy. Here, individuals are willing to act altruistically and promote cooperation based on the reputation for similar behaviour in another individual. This complex form of cooperation requires (or rather, co-evolves with) language and a sense of a public identity—what we know as ”society”. Here, we begin to see the logic of kibbutz communalism—the role of gossip and reputation in a small community to promote and enforce cooperation and keep so-called “free-riding” (ie, the tragedy of the commons) to a minimum.
The last two mechanisms are similarly complex. One is “spatial selection”—the fact that cooperation can evolve and expand, even without indirect reciprocity, as individuals coalesce into clusters and networks of cooperative behaviour. Finally, “group selection”—long dismissed by most biologists—now stands on firmer ground as a theory. Nowak also calls it “multilevel selection” to underline that direct and indirect reciprocity can encourage natural selection to operate not simply at the level of the individual but also at the level of the community or the tribe. But he notes: “This cooperative mechanism works well if there are many small groups and not well if there are a few large groups.” That caveat offers food for thought when considering the issue of sustainable size for livable cities, communal societies and cooperative organizations.
Nowak brings a sense of urgency to his final chapter, where he notes that looming environmental crises—the Tragedy of the Commons on a global scale—make the need for human cooperation imperative. We have the tools. We are genetically programmed, in the right circumstances, to benefit from cooperation. There is nothing stopping us…except the paradox of the Prisoner’s Dilemma and the short-sightedness of immediate gratification over the long-term benefits of cooperation.
“Humans are SuperCooperators,” Nowak concludes. “We are able to draw on all five mechanisms of cooperation. In particular, we are the only species that can summon the full power of indirect reciprocity, thanks to our rich and flexible language. We have names and with them come reputations that can be used to help us all to work more closely together. We can design our surroundings… to achieve more enduring cooperation.”
We just need to find the collective will to do so.
SuperCooperators: Altruism, Evolution, and Why We Need Each Other to Succeed. Martin A. Nowak, with Roger Highfield. Free Press, New York, 2011.