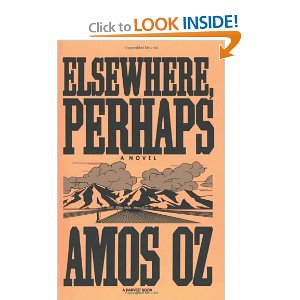 Amos Oz has claimed that there is no such thing as a “kibbutz literature”. Yes, there are books written by kibbutzniks and books written about kibbutzniks. However, even after 100 years of kibbutz life (and nearly as long writing about it), no motif or technique unifies all these spilled words other than a setting. “The kibbutz,” Oz has argued, “has not inspired any ‘mutation’ in Hebrew literature.”
I won’t disagree with Oz: He is Israel’s most-famous author, a (former member of Kibbutz Hulda for 30+ years, and a widely quoted authority on matters literary, communal and political. (Would someone give the man a Nobel Prize already?)

That said, if there were a kibbutz literature, Oz’s first novel (and second book, after his debut collection of stories, Where the Jackals Howl) Elsewhere, Perhaps deserves a place of honour as the classic text in the transitional period from the “heroic age” of the kibbutz to its modern depiction as a complex, troubled microcosm of the greater world around it.
Oz’s dedication (to the memory of his mother) tries to throw off the reader by demurring: “Do not imagine that Metsudat Ram”—the book’s fictional kibbutz, near the Syrian border and the Sea of Galilee—”is a reflection in miniature. It merely tries to reflect a faraway kingdom by a sea, perhaps elsewhere.” Oz has said, several times, that he had been inspired as a writer by Sherwood Anderson’s Winesburg, Ohio, to realize that literature could find universal resonance even within the confines of a small, otherwise nondescript community. That stories didn’t need to happen in New York or Paris or Moscow to matter. Kibbutz Metsudat Ram becomes Oz’s Wineeburg.
As it tells the story of this settlement, from the multiple perspectives of different kibbutzniks, the novel draws tension from a trio of love triangles: one that has happened and left a bitter fallout; another—in part a consequence of the first betrayal—has become the recent focus of kibbutz gossip; and the third melodrama develops and concludes over the course of the novel. Socialism and Zionism may be the ostensible philosophies of the kibbutz, but the urgings of the heart (and lower regions of the body) drive many of its members’ actions. The howls of the jackals and the unseen, unnamed “enemy” in the jagged hills beyond the wire fence of the well-ordered kibbutz suggest external forces of chaos that threaten the community, and yet human impulses within its gates—the casual adultery, the malicious whispering, the vandalism of bored youths—prove more corrosive.
The timing of the novel’s publication is significant. It was published, in Hebrew, in 1966, the year before victory in the Six Day War (in which Oz fought in the Sinai campaign) transformed the young nation of Israel in ways that it is still reckoning with. Before 1948, the kibbutz was the pre-eminent form of settlement in pre-state Israel, the pioneers who helped lay down the borders for the future nation; after 1967, their reputation as nation builders diminished and was overshadowed, controversially, as religious and right-wing settlers began to move into the occupied West Bank and Gaza. (A few secular kibbutzim were built beyond the “Green Line”, but the movement otherwise remained focused on growing its existing communities and building new ones within the 1948 borders.)
Beyond this historical context, though, Elsewhere, Perhaps suggests a distinct technique of “kibbutz literature” through its narrative voice. While Oz drifts into the consciousnesses of various characters, the book begins and ends and speaks throughout in the collective “we” of the kibbutz as a whole. It is a subtly ironic “we”, a slightly naive “we”, though, a voice that, while trying to justify the ways of the kibbutz to readers and other outsiders, doesn’t always recognize the flaws in the community or its residents that are there to be read between the lines. The “we” sounds a bit like first-person plural narrator of Jeffrey Euginedes’ The Virgin Suicides (told in the collective voice of the boys who observe the mysterious lives and deaths of the Lisbon sisters on their suburban street) or the “downstage narrator” of a Tom Wolfe essay or nonfiction novel, which takes on the verbal tics and biases of a group rather than an individual character.
“Our village is built in a spirit of optimism,” this narrator tells us, and yet optimism seems hard to come by in the settlement of Metsudat Ram. Perhaps, notes the narrator, readers have an overly nostalgic, romantic image of village life: “The object of the kibbutz is not to satisfy the sentimental expectation of town dwellers. Our village is not lacking in charm and beauty, but its beauty is vigorous and virile and its charm conveys a message. Yes, it does.” One of the most telling passages (and most relevant to my own interest in the history of the kibbutz) talks about the vital power of gossip on the kibbutz. The narrating “we”, in many ways, is gossip personified—is a reminder that perhaps all storytelling, all literature, begins as gossip, as tales traded between neighbours:
“Gossip plays an important and respected role here and contributes in its way to reforming our society. … Gossip is simply the other name for judging. By means of gossip we overcome our natural instincts and gradually become better men. Gossip plays a powerful part in our lives, because our lives are exposed like a sun-drenched courtyard. … Gossip is normally thought of as an undesirable activity but with us even gossip is made to play a part in the reform of the world.”
As a money-less, anti-authoritarian, utopian settlement, the kibbutz is based instead on a “reputation economy”. As the narrator reminds us toward the end of the book: “The community can neither exercise brute force nor hold out promises of material gain. Our system compels us to rely entirely on moral sanctions.” Those “moral sanctions” consist of the raised eyebrow, the cold shoulder, the awkward question, the whispers that circulate around the dining hall—a complex semaphore that signals a community member’s rising or falling social standing. Gossip holds the kibbutz together, as the narrator makes clear. But the novel also asks: At what cost?