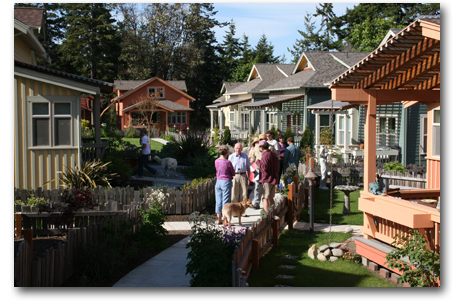 I had a “kibbutz moment” this past Saturday.
It was the last weekend of September, and fall was definitely looming. One of the neighbours on our cul de sac had the brilliant idea to suggest a street party for that evening. We’d had one party, usually an impromptu annual event, earlier in the season. However, new owners had moved into houses sold over the summer and pair of younger longtime residents were moving out of their parents’ homes at the end of the month. It would be a good chance to say hello and goodbye at the the same time.
It turned out to be a perfect night: likely the last warm, breezeless evening of the year. We pulled out a barbecue and tables and chairs and spread out a huge potluck (heavy on desserts). Our kids chased each other (and huge bubbles) around the cul de sac and drew chalk drawings across the pavement. Names were put to new faces. Recently departed neighbours, already much-missed, were invited for a noisy reunion. In the distance, a soundtrack from the Rifflandia Festival drifted from Royal Athletic Park. It reminded me why we had moved here in the first place and then undergone the trauma of renovating our house, when it seemed too small for two kids, rather than moving elsewhere.
The street party evoked memories of the barbecues and bonfires we had on the kibbutz, in the scrubby commons in between the volunteers’ quarters, drinking beer and swapping stories. It also echoed many of the themes and ideas and values I’d been reading about in a wonderful new book by Ross Chapin, an architect from Whidbey Island, Washington, called Pocket Neighborhoods: Creating Small-Scale Community in a Large-Scale World. In this compellingly written and beautifully designed volume—an eye-pleasing coffee-table book with the intellectual urgency of a political manifesto—he lays out the historical precedents of and design principles for human-scale developments, built to promote communal interaction rather than enforce privacy and facilitate car travel, what he calls the “pocket neighourhood”.
Chapin and his firm have purpose-built a number of these “pocket neighbourhoods” in the Pacific Northwest. At the most basic level, the ideal pocket neighbourhood consists of a number of key features:
In other words: Build a ‘hood that encourages what Chapin calls a “web of walkability” and the serendipitous encounters that occur once you free your ass from your car seat.
The book provides a wide array of sketches and photos from the developments that Chapin has pioneered, complemented by historical antecedents (Oak Bluffs on Martha’s Vineyard; Hofje almshouses in Holland; Forest Hills and Sunnyside Gardens, both in Queens, and other neighbourrhoods inspired by Ebenezer Howard’s “garden city” vision; Village Homes in Davis, California; SoCal’s bungalow courts; floathome communities); contemporary examples of and ideas for creating pocket-like features in existing neighbourhoods (traffic-slowing lanes and woonerfs; backyard cottages; “defencing” backyards; “sagine communities” for retirees; cohousing projects; Earthsong in New Zealand and Christie Walk—an “urban eco-community” in Australia; Swan’s Market in Oakland; community gardens, cul de sac commons—and potlucks!—alley greening; intersection painting in Portland… on and on!); and short profiles of visionary architects, planners and neighbourhood activists (Mark Lakeman of Portland; Karl Linn, a kibbutz founder who went on to teach landscape architecture at UPenn; Jim Leach—no relation—the largest cohousing developer in the U.S.; Paul Downton of Ecopolis Architects; Jan Gudmand-Høyer, who studied the kibbutz movement and then pioneered Danish cohousing models; investment advisor Catherine Fitts, who invented the “popsicle index” of community health; Judy Corbett of the Local Government Commission; Hans Moderman, the counter-intuitive traffic engineer and woonerf pioneer who realized that to calm traffic you had to confuse drivers).
So many of the key concepts outlined in Chapin’s “pocket neighbourhood” vision have been part of the philosophy of kibbutz design for 70+ years. In fact, using some of his tips to turn any street into a “pocket neighbourhood” would be a good example of what I’ve been calling “kibbutzing your ‘hood”: that is, integrating the connections essential to community life right into the built space. Best of all, you don’t have to be a radical socialist to live in a pocket neighbourhood; they are designed, in Chapin’s perspective, to balance our desire for personal privacy with our innate human sociability. These more closely interconnected streets and neighbourhoods also create what he calls (on his website but not in the book) a network of “shirt-tail aunts and uncles”—neighbours who watch out for each other, who have a stake in the safety and healthy development of the children (and adults) around them. (We’re lucky enough to know several.) It takes a village. Or at least a pocket neighbourhood.
I’m hoping to talk to the author in person at some point to learn more about the theory and practice of pocket neighbourhoods, and perhaps compare notes with my own research into the principles of kibbutz design. In the meantime, I’ve been inspired by his optimism that we can create a more rich and sociable community on our own—and also a little envious of those developments he has already created, in which neighbours have been given a central traffic-free commons in which to come together, every day, and build a community one conversation at a time.