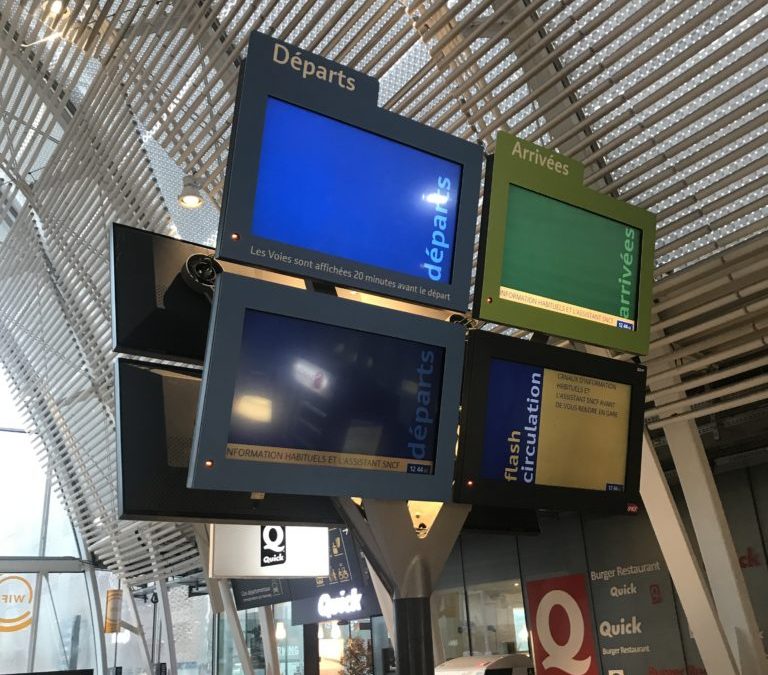 On every long voyage (and many smaller ones), there’s a moment when the best-laid plans go awry, itineraries get disrupted, Mother Nature wreaks havoc, and/or logistics get log-jammed. That’s when a trip becomes an “adventure”.

You can’t predict when you’re going to have an adventure. (But blogging about how your trip has been going smoothly is likely a good trigger for the karmic gods to mess with your journey!)

Adventures tend to be what we remember, though, even if they give us grey hairs at the time. I still recall an ill-fated expedition to renew my visa while living in the Czech Republic that involved a bus trip from Prague to some obscure border town, a break down in the snow, and a futile scramble to make it back to the city (without a new visa) before I was meant to teach my ESL class.

That’s just a segue to say: We had our first real adventure of our trip.

By week six of our travels, we had entered France and were enjoying what felt like the doldrums, especially once we settled in Saint Remy de Provence for a week. We slept in, we ate well, we did one or two activities in the afternoon, and then played ping pong or read on the patio in the Provençal sunsets. One day led smoothly into the next. A couple late-night storms and cloudy days reminded us that autumn was well upon us, but nothing to disturb our serenity.

The forecast called for several days of rain as we headed off to Palavas les Flots, on the Mediterranean coast, but when we arrived on a Saturday afternoon, the sun was out and surfers were riding the waves on either side of the town’s canal. The next day was more overcast and windy and a full-on gale swept through overnight, rattling awnings and driving the current of the canal back up-river. I double-checked on our rental car, parked a few minutes away in a municipal lot, to make sure it wasn’t getting flooded. The next day, it rained but we avoided most of it with a relaxing day trip to Espiguette Beach — a huge swathe of duney sand and sea (only AJ dared to take a plunge) and then an excellent aquarium (or rather “Seaquarium”) in Grau de Roi.

Then the next day the heavens exploded. First, massive thunderstorms illuminated the sky and shook our Airbnb over night. And then sheets of rain poured down for most of the day. AJ, Briar and I tried to venture out in what seemed like a break in the rain, to dump recycling and check on the car again, but we were soaked through within minutes.

Palavas is surrounded by canals that branch off the Rhône, and the highways out were already collecting water before the rain really started falling. I asked our AirBnb host, a tourism centre guide, several police officers, and even the woman at a nearby bakery if we’d be able to drive out the next day. Does Palavas ever get locked in by flooding? (I’d also googled the town and found an article about how likely it was to be severely affected by global warming.) Non, it will be fine, they all assured me. If you can’t get out the direct route, there was an alternate that would only add 10 or 15 minutes to Montpellier.

The rain tapered off a bit that night, although the lightning returned, and then the rain started again. We scrambled to leave as soon as possible. The car needed to be back in Montpellier train station for 10am, but we wanted to get there even earlier… We packed up the car, dodged a few major puddles leaving town and enjoyed a relatively brief window of rainless sky for the drive to Montpellier. Car dropped off. One less worry.

But then we crossed the street to the Gare Roch station and saw that the earlier train to Barcelona had been delayed by two hours… it hadn’t even left yet. Ours wasn’t set to leave until 1:40pm so we hoped we could be fine. We were wrong. A glance at the departures/arrivals screen showed extending delays and cancellations for almost every train.  And then the skies broke open again… and unleashed more rain and wind than I’d every seen before. Some locals video’d the deluge from the safety of the station’s high ceiling… although that soon began to leak. Other travellers sat and cried, either due to cancelled connections or the explosions of thunder that ripped overhead. Finally, the arrival/departures screens just went blank. 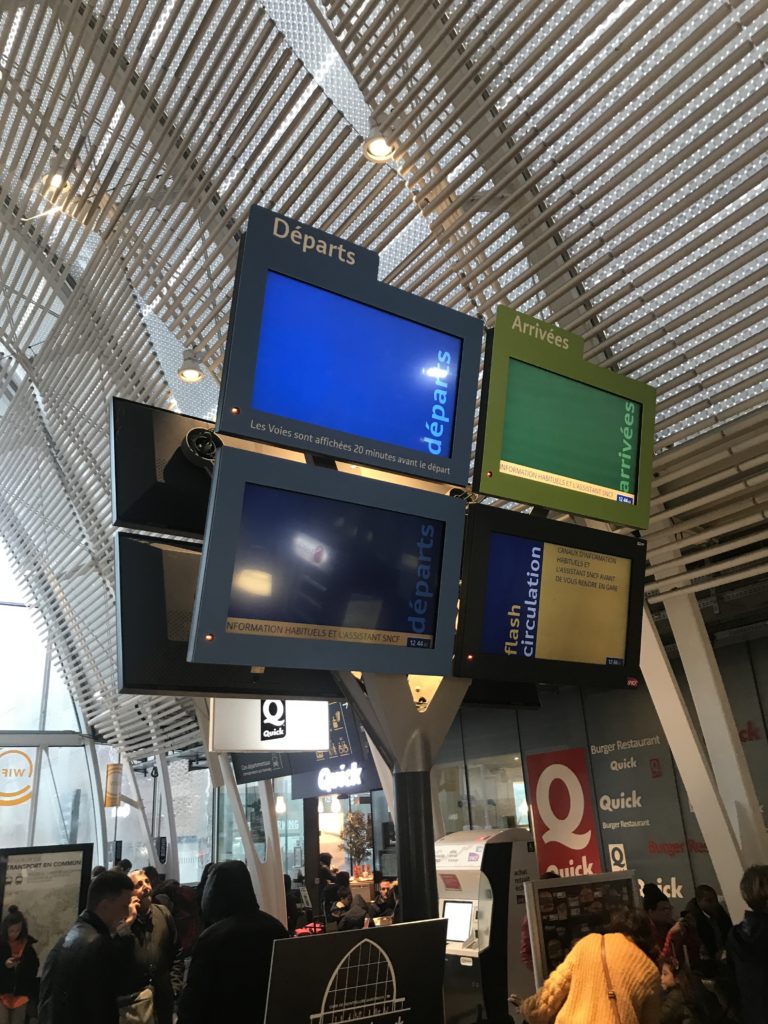 We joined the line of puzzled travellers and learned that no more trains wold be running today, so we should switch our tickets till tomorrow. So we did, for a 9am train. We did a quick search and found a hotel nearby. We’d have to swallow the extra fee — we were already paying for an AirBnB in Barcelona — but we needed a place to stay. The hotel wasn’t far. In fact, I realized it was down the stairs and across the street. But when we rushed with our luggage in what felt like a slow-down in the rain, we arrived at the front desk as soaked as if we’d fallen into a wading pool.

The hotel was worth every Euro. The kids had hot showers and lounged in the fat white bathrobes. We were able to check the status of the storm — it was epic in other areas of southern France, especially Béziers, which had been hit with 4 months of rain, nearly 24 cm, in the span of four hours. We decided that perhaps a bus might be a better option, as it seemed unlikely the trains would run tomorrow morning… in fact, the staffer had said it might not be till Friday. Then I noticed a message online saying that the tracks had been undermined between here and the border and might not be repaired for 10 days—well, after we needed to fly home. Jenny phoned around to make sure the roads hadn’t been washed out too and then we booked seats on a a noon Flixbus for the next day and walked back over to the train station (the rain was finally calming by late afternoon) to get our tickets refunded. 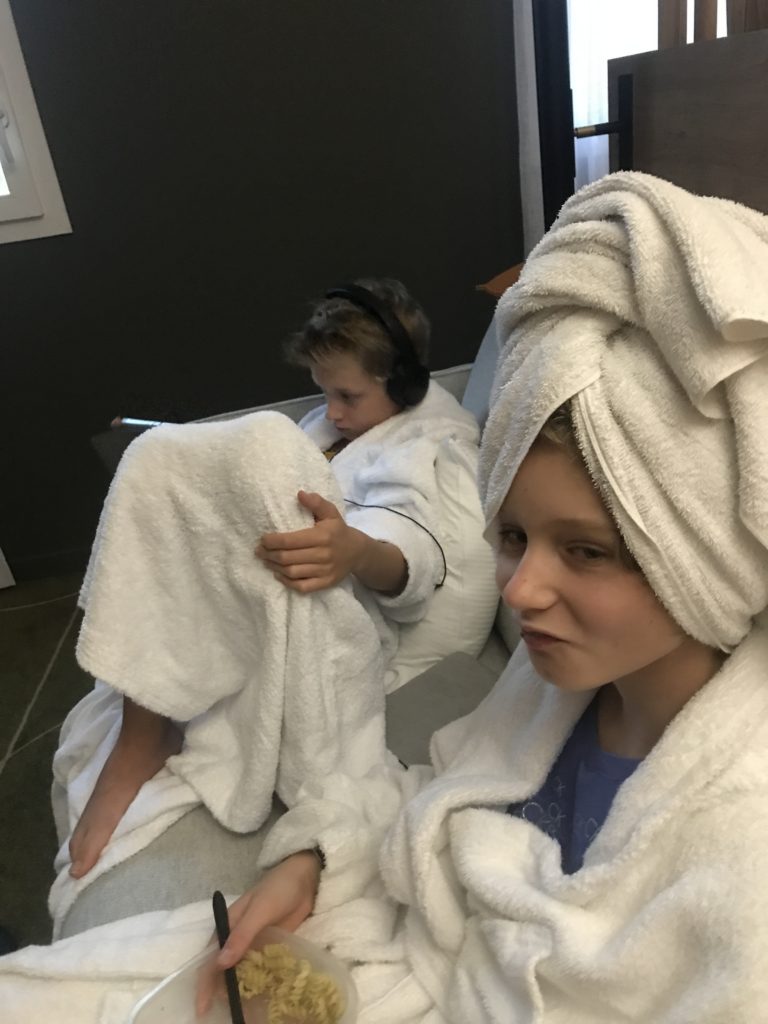 Then we enjoyed a “bonus” visit to Montpellier… wandering through its big central square and park boulevards, and then through its old town, until we could finally complete a mission that the kids were fixated on since arriving in France: eat some authentic macarons!  (We managed to sample flavours from the two best shops in town.) Then, after a return to the hotel, we went out for dinner (after much discussion and Yelp-scanning) and lucked in (after our first choice was closed) on a little French restaurant called La Tomate… where I completed a mission I hadn’t even known I’d accepted: try some frogs’ legs!

We had time to have a big breakfast spread and get packed up the next morning… and then suddenly hit the panic button again. I’d decided to book an Uber in advance, rather than a taxi. My mistake. The arranged time passed and passed. On my app, I could see the driver circling our location — 2 minutes away, then 3, then 4… If we didn’t get to the bus station by noon, our tickets were useless. I told Jenny to get the front desk to call a taxi as backstop and we thought about dashing to the station to grab one there… when our Uber arrived nearly 15 minutes late. “Get us to the station!” I yelled as we hurled our luggage into his trunk… and he did, with plenty of time to spare.

We’d paid extra to sit together on the bus, but the semi-chaos that is Flixbus rendered that fee meaningless. The two men in our seats said they’d bought assigned seats but the sullen driver had told passengers to just sit where they want, so they did. In the end, the kids sat a few rows behind us and we enjoyed a quick, sunny, smooth and quiet 4.5-hour drive from Montpellier to downtown Barcelona with the Pyrenees rising to our right as we crossed into Spain.

Once there, we grabbed an official cab and showed the driver the address of our AirBnb. The ride was faster and cheaper than I’d expected… but that’s because he’d dropped us at the address in Barcelona, rather than Llobreget Hospitalet, the suburb where we were actually staying. Thankfully, taxis are plentiful in the city and we jumped into a second one and (finally!) made it to our final accommodation of the trip.

In the end, we only lost one day in Barcelona and one night of AIrBnb fee, although we made a little money back by cashing out our pricey high-speed rail tickets for the bus. For our final three days, our trip has included and will conclude by negotiating our itinerary around the political demonstrations — which got violent last week — throughout the city (we took a trip to the beach yesterday but made sure we were back in our AirBnb before the 5pm rally that saw 350,000 Catalonian protesters take to the city centre) and two potential airport strikes (security staff and baggage handlers) tomorrow morning.

Only then will our adventure be complete…