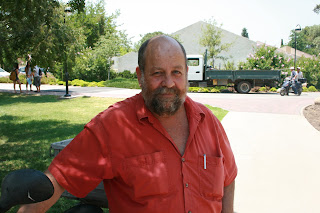 I only vaguely realized at the time how lucky I was to land at Kibbutz Shamir. During my months there, I heard rumours about the long days, rough conditions and general dissatisfaction of volunteers at other, less well-off kibbutzim. In 1988/89, when I lived in Israel, the whole movement was undergoing a profound financial crisis. The nation had emerged from several years of recession and hyper-inflation, and many kibbutzim were saddled with huge, oppressive debts. Cutbacks were necessary. Standards of living plummeted. Many members lost confidence in the movement, in their kibbutz, and left for Israel’s cities or immigrated overseas. Numerous kibbutzim struggled in this tailspin of economic, demographic and ideological decline.

Shamir wasn’t one of them. As volunteers, we were treated well. The kibbutz organized Hebrew lessons, educational sessions, and took us on Shabbat day trips and, twice a year, an extended five-day trip down to the Gulf of Aqaba and back. We were buffered from the economic anxiety experienced on many other communities. When I returned last June, I had the opportunity to interview Itzhik Kahana, who had been in charge of the orchards when I was a volunteer and is now serving as the kibbutz director. I include here an exercpted transcript of our talk about the past, present and future of Kibbutz Shamir.

What is the story of Shamir?

It was founded in December 1944 by the group Hashomer Hatzair from Romania. Most of the people were from two groups, of different ages, but the same movement. They knew each other well. They came to Israel and started building the kibbutz near Haifa. Gathering there, not building a kibbutz. They were in the port and in factories for about five years from 1939 until they were assigned to this spot because the other spot was not frontier enough. The movement gave them a few options and eventually they chose this one because there was completely nothing except rocks. That seemed to appeal to their frontier mentality.

How many people were in that first group?

About 160 people. About 40 to 50 left quite early. It was very harsh in the first few years. Other people joined the kibbutz, like my mother, who came out of Romania after the war, after she was in a British prison for six months for illegal immigration. After she got out—after she was sent here—then she met my father.

Was this the time of the “tower and stockade” movement?

A bit later. This land was bought by the Jewish National Fund. The main areas of farming in the beginning was on this hill, which is not much. For the first five years, they just took out stones out of the fields. There were fields for livestock, but the standard of living was very low. Nineteen-forty-eight made a big difference because all the Arabs of the valley left the villages and went to the mountains to wait for the Syrian army to kick out the Jews, which didn’t happen, so we got fields in the valley. All our agriculture is in the valley. The field-growing is in the valley.

On the Arab fields?

No. Some of them were fields, some of them were swamps we couldn’t use. Whatever they could use, they’d use. There was a lot of digging of canals. We had to spend a lot to make this land arable, so you could work on it. … We were living on agriculture basically until the beginning of the 1970s.

The post 1948 border [with Syria] must have added another level of tension.

Some people left because of it. It was too much for them. There used to be shooting almost daily. Just random. Sometimes it was more—mortars. That’s one of my first memories, the shooting.

In 1972 we opened the optical factory. The idea is to get work for the peple that are getting older and can no longer work in agriculture and it went on like this for about 10 years. It was bifocal lens. Then, at that time, the group that led the optical factory decided they needed something more sophisticated and decided to develop multi-focal lenses. It wasn’t easy. It took 10 [more] years.

So by the beginning of the ‘80s, there still was nothing there. We invested money into new technologies that we bought, in ’83, and then we bought another line, and another, and another. In the early ‘90s we finally had a breakthrough in the production of the multi-focal lenses. It’s climbing up.

There was a lot of people working there.

What was more successful?

The pigs were successful. But in 1963 the Knesset passed a law that Jews are not allowed to raise pigs, so we had to close it. The beef is very successful. It’s run by professionals who do it right, out of tradition.

In 1999 we accepted an investor in the optical factory. … Then, we got a partner in Shalag [fabric-making factory], which is a group of investors. That was the basic idea—that we go to public offering to capitalize on our success.

Basically, but first the money goes to the partners. Then it went to two things: the pension fund for the members, which was almost empty, and [our debt], which was very heavy and very annoying.

Was this a result of ‘80s financial crisis?

No, we just lived beyond our means. We didn’t run our financial things right.

Do you still run a volunteer program?

No. Farming went down… We now use a lot of Thai workers. The margin of profits is much lower and you cannot support volunteers in the system. Kibbutz members need all the jobs. Someone can work in the dining room for income. Before, it was a volunteer job.

Has the ideological vision of kibbutz movement changed? Are kibbutzniks still leaders in Israel?

Unfortunately not. We are one of the most hated groups in the country. We are not leading anymore, like it was in the army, in government, and we don’t have the pretenses to lead. We tried to. Whoever wants to be a politician goes into politics. Now we try to be successful in what we do, and eventually that helps you to lead. … The country is built; we don’t have to rebuild it. We have to find new challenges.