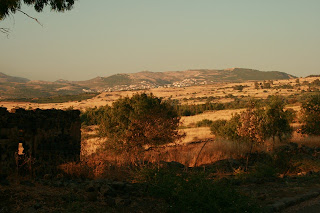 While not directly kibbutz-related, there was an interesting article by Saleem Ali about a proposed “peace park” along the Syria-Israel border, in the Golan Heights, not far from Kibbutz Shamir (which once was on the border with Syria before the Six Day War). The posting discussed a symposium last month in Tel Aviv about how ecological projects can help peace-building in the Middle East.

The Golan Heights are an especially complicated piece of land, even by Mideast standards. Formerly part of Syria, captured by the IDF in 1967, and populated largely by Druze Arabs who don’t consider themselves Muslim or Palestinian or Israeli and practise a highly secretive splinter sect of Islam. (Confused yet?) What I most remember about visiting the Golan Heights when I lived in Israel 20 years ago was the Shouting Fence. Located near Majdal Shams, one of the major Druze villages on the slopes of Mt. Hermon, this barbed-wire no-man’s land had separated friends and family members since 1967. For years, they had come (usually on Fridays, I believe) to communicate via megaphone or loud voice to other Druze across the new border in Syria.

I’m not sure if the Shouting Fence still exists in that form, but it was strikingly symbolic of the complex and sorrowful divisions in this part of the world. (I wrote a poem with that title years ago and have been tempted to call other projects by that name.) That’s why the idea of a borderland peace park holds such hope (even if many critics consider it mere dreaming), especially for the Druze people, who have never really cared much for the national borders that divide them.

In his article / blog entry, Ali, the author of a book about peace parks, did mention (although didn’t name) a kibbutz in the Jordan Valley that has a special arrangement to grow crops on the Jordanian side of the border and a “peace island” in that region, where Israelis and Jordanians can visit without visas. He also acknowledged skpeticism on both sides of the debate, noting that “Arabs are highly suspicious of conservation efforts in this context just as Native Americans have been suspicious of the US. National Park system, whose establishment often excluded them from their land. Thus any peace park must be one where access and economic development are concurrent with conservation.”

Still, I find it hopeful that the idea of ecological conservation might be used as a tool to get two deeply divided nations talking about peace and, more importantly, to get deeply suspicious peoples meeting each other on common ground.