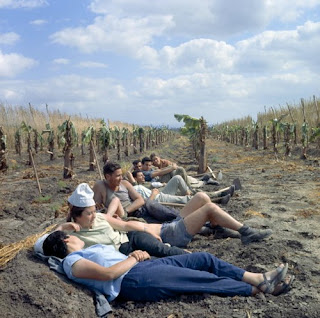 British academic and historian Tony Judt has been an often controversial Jewish critic of Israeli foreign policy, as well as other ideologies on the left and right. In 2008, he was diagnosed with Lou Gehrig’s disease and is now paralyzed from the neck down but is still, apparently, lecturing and writing. He has been publishing a series of memoirs and reflections in the New York Review of Books, including one titled “Kibbutz” about his early experiences of and passions for “Labour Zionism” and “muscular Judaism” as a young kibbutznik in Israel.

He writes with a typically contrarian slant that, from a memoirist’s position of retrospection, refuses to indulge in nostalgia and instead peels away his early idealism and the surface of kibbutz life to observe more critically the essence of who he and his compatriots really were and what they were doing. As he writes about kibbutz life:

I adored it. Eight hours of strenuous, intellectually undemanding labor in steamy banana plantations by the shores of the Sea of Galilee, interspersed with songs, hikes, lengthy doctrinal discussions (carefully stage-managed so as to reduce the risk of adolescent rejection while maximizing the appeal of shared objectives), and the ever-present suggestion of guilt-free sex: in those days the kibbutz and its accompanying ideological penumbra still retained a hint of the innocent “free love” ethos of early-twentieth-century radical cults.

In reality, of course, these were provincial and rather conservative communities, their ideological rigidity camouflaging the limited horizon of many of their members. Even in the mid-1960s it was clear that the economy of Israel no longer rested on small-scale domestic agriculture; and the care that left-wing kibbutz movements took to avoid employing Arab labor served less to burnish their egalitarian credentials than to isolate them from the inconvenient facts of Middle Eastern life. I’m sure I did not appreciate all this at the time—though I do recall even then wondering why I never met a single Arab in the course of my lengthy kibbutz stays, despite living in close proximity to the most densely populated Arab communities of the country.

You might not always—or ever—agree with Judt’s political take on Israel but it’s hard not to appreciate his attention to detail as a memoir writer and his willingness to chronicle his own naivete, even as he dissects the impassioned illusions of those around him.