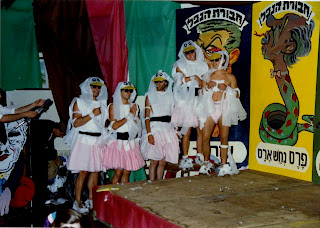 The Jewish holiday of Purim was more than a month ago. But I’ve been transcribing my old journal from my time as a volunteer and came across a brief description of the festivities on Shamir. It reminded me that, as I research the history and economics and sociology of the movement, not to forget about the life of the kibbutz.

So many of volunteers’ best memories, like my own, centre around the shared cultural events that the kibbutzniks organize to reinforce their sense of community. And no event is more booze-laden and bizarre than Purim. I’m glad I remembered to jot down a few notes afterwards. And while the photos are embarrassing, they do bring back memories, too.

Yesterday was Purim, a Jewish religious festival celebrating the story (possibly apocryphal) of Mordechai’s saving the Jewish people from the persecution of the king’s advisor Haman. It is the one holiday that the Jews are not only allowed but expected to get drunk on. As part of the evening’s festivities, the volunteers performed a pair of acts. The first, starring Tim [from Chicago] on guitar and Emma, Mandy [British volunteers], & co. singing backup, was a song about life as a volunteer, sung to the tune of “My Generation”, entitled “Ghetto Creation”. The grand finale to the live entertainment segment of the Purim party was presented by Jim, Mattias, Wolf, Bruce and myself. We danced a unique version of “Swan Lake” to a medley of music that included Mendehlson, Little Richard, and the theme from “The Magnificent Seven,” as well as various rude bodily noises. Our costumes were complete with swan heads, flowing feathers, downy feet, pink tutus, dark shades and cigarettes. Mattias [from Sweden] had the choice role as the dying baby swan whom we discovered, pranced about, and eventually tore to shreds. Renowned drama critic Yoav [a kibbutznik friend] applauded us as “the best act”. Wolf [an older German volunteer] had gotten himself completely pissed as we were waiting for our stage call, sitting awkwardly in full costume, and was blurting out bizarre comments such as “Johnny hates goldfish” and “Get warm Swede!” 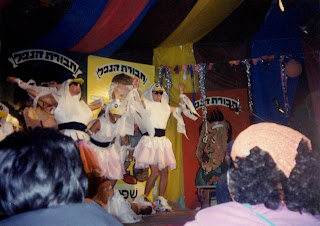 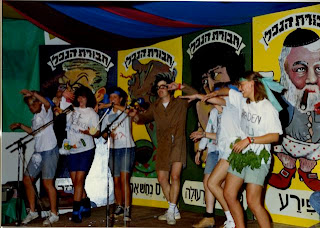