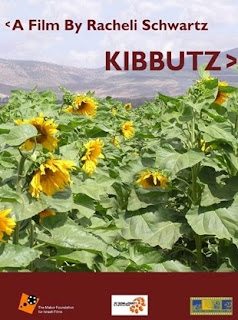 When my DVD copy of the documentary Kibbutz arrived in the mail late last year, I was so busy that I didn’t have time to put it into a player for a couple of weeks. When I did, I was disappointed that it had gotten damaged during its journey from Israel to the West Coast of B.C. The film’s producer quickly mailed a new copy. This time, I immediately popped it into my computer at work to make sure it functioned, so I’d be ready to view it when I had more free time. An hour later, I had watched the film in its entirety—and become so engrossed in the account of the slow, sad unravelling of Kibbutz Hulata that I nearly forgot to pick up my daughter at daycare!

Kibbutz, released in 2005, is one of the first examples of what I call “privatization cinema”—that’s why it gets to claim the simple name of its title. Interestingly, while other films chronicle the debate around and prelude to the vote to privatize on different kibbutzim, Racheli Schwartz‘s documentary tracks instead the stages of grieving and disillusionment that follow Hulata’s decision to reduce its communal commitment to its members. What makes Kibbutz so affecting is the personal intimacy and extended context that Schwartz brings to the material. In fact, it was originally subtitled “A Personal Diary.”
A member for 30 years, the filmmaker isn’t just a visitor offering a snapshot by an outsider of her kibbutz. Instead, her film follows various members (including her  own family) over the course of five years—three older women, from the founding generation, become symbols of the kibbutz’s lost ideas and abandoned history, as they die off, one by one. Schwartz, who asks people questions from behind her lens, admits early on that “making the movie helped me to decide to stay.”
It can’t have been an easy decision. Her film opens memorably with the story of a laid-off citrus worker, a member of the kibbutz, who hanged himself from a tree overlooking the orchards where he once worked. These same orchards are later sawed down for being unprofitable. Schwartz captures remarkably revealing footage of a privatization consultant, hired by the kibbutz, going through a list of enterprises and expenses and telling kibbutz managers how many employees to lay off and which operations to shut down. “The kibbutz was the main way to make settlement possible,” the financial advisor tells Schwartz later. “At some point, it was finished.”
The filmmaker has an ear for such memorable quotes. “We are going through a process of breakdown,” says one member. “They stole the kibbutz from me,” announces another. One kibbutznik wonders if the fact that Hulata—located south of Shamir and named after the Hula Valley—was built on the absorption of underprivileged reason was partly why it has failed to thrive in the hyper-capitalist 21st-century. “Since the changes on the kibbutz,” he laments, “people only talk about money.”
Schwartz also has a keen eye for images that carry symbolic weight. When managers decide to first privatize and then shut down the communal dining room, her camera lingers on the skinny cats looking vainly for scraps and then fixes on the stopped clock in the empty hall. She reveals how the simple act of growing shrubs becomes for many members a defiant act of walling themselves away from their neighbours. She interviews an employee of the kibbutz laundry, his salary slashed because his labour is now deemed menial, who has turned to religion because he feels his kibbutz has turned its back on his own family, and yet he still saves the loose shekels he finds in his machines and gives them to families more needy than his own. (His own son, affected by the changes, also tries to commit suicide.) She observes a music teacher packing her car full of wind and string instruments and driving off, before narrating: “A kibbutz that has reached the point that it has to sell its musical instruments has lost its way.”
It’s a powerful, damning sentiment in a beautifully wrought documentary that offers a deeply personal yet rigorously researched perspective on the privatization debate. I don’t know if you can generalize from the experiences of Hulata to all kibbutzim, but those communities still considering the prospects of privatization would be wise to watch this movie and learn from the mistakes documented so powerfully in its images. For anyone curious about the film, check out the trailer below…