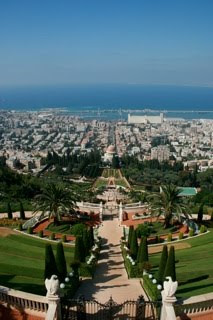 Kibbutz Mishmar HaEmek
The night before, after an incredibly busy day, we pulled into Kibbutz Mishmar HaEmek around 10:00 pm and were greeted by Lydia Aisenberg, a member who was graciously letting us stay at her apartment (and her son’s, who was away) for four nights while we did research in the area. We chatted with Lydia for a bit before bedtime, and then again before she headed off to work at Givat Haviva (where I had met her the summer before). Later, we would have dinner with her at the huge dining hall of the kibbutz—one of the largest, most successful and most resolutely communal in Israel.
Lydia had told us that even here, at Mishmar HaEmek, members were considering changes to their way of life. There had been grumbling (as there was from the first days of the first kibbutz) about “free riders” who don’t carry their weight and the amount of waste and economic inefficiency involved in the communal system, especially the dining hall and its free food. Charging a fee for food—the first step in privatizing the dining hall—was being discussed.
By the rules of the kibbutz, guests were supposed to eat at the hall with the members. But because Lydia had to leave for work early and we tended to return from our interviews late, that was hard to coordinate, so Jerry and I ate alone. I felt self-conscious and even a little guilty eating on the kibbutzniks’ dime, even if it was just a handful of meals. We stood out—or at least I thought we did. An old woman at the table where we sat asked us who we were. Friends of Lydia’s, we explained. Later, she chided Jerry for eating from a bowl without a tray—he was going to get the table-cloth messy, she suggested, and cause more work. At our last meal, she asked what we did all day. We were researching a book about kibbutzim, Jerry explained. That seemed to satisfy her curiosity—for now. We definitely got a sense of what it must be like to live in the fish bowl of a kibbutz, where what you do is everyone’s business.
The Baha’i World Center
Our next stop—after a few bewildering loops through the switch-backing mountain-side roads of Haifa—was the World Center of the Baha’i Faith. Everyone, including Jerry, asked me why I had decided to visit the Baha’is on a trip that was supposed to focus on the kibbutz movement. It was difficult to explain. But let me try.
One, my trip (and my project) had an interest in utopian communities in general, not just secular Jewish socialist ones. Of all the major religions (and minor ones for that matter) with their confluence in Israel, the Baha’i faith seems the most utopian in its philosophy—in the way it seeks to better our material lives and social practices even as it preaches spiritual transcendence. Its core belief is a unity of God, a unity of religion and a unity of humankind.
Two, just plain old curiosity. I’d visited Haifa several times, but the closest I’d come to the World Center was viewing its expansive tiered gardens through the uppermost gates, after hours, during my visit to Haifa University last summer. The Center with its meticulous landscaping is a major tourist attraction, and not just for visiting Baha’is. I wanted to see what the fuss was all about. I’d visited the Dome of the Rock, the Western Wall, and the Church of the Holy Sepulchre—so why not the major shrine of the Baha’i faith?