Review: A Tale of Love and Darkness 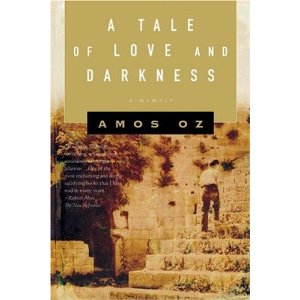 Last summer, I bought two paperback translations of works by Amos Oz from an independent bookstore/coffeeshop in Tel Aviv’s Rabin Square. One was Where the Jackals Howl, a thin volume of stories, which I devoured over the final few weeks of  my trip. The second was larger and more recent: Oz’s 500-page memoir A Tale of Love and Darkness.

It’s not a book to idly skim through at the beach. Rather, it’s a masterly act of reconstructed memory, both haunting and humorous, a mental reckoning by the author of his family history and his own childhood in Jerusalem on either side of the War of 1948 and the turbulent birth of the State of Israel. The dark heart of the book, which Oz foreshadows and then deftly circles until the revelation of the final few sentences, is the crippling spell of depression that gripped his mother, that drew her away from husband and child, and that ultimately led to her suicide when he was 12.
Oz is known, of course, as both a world-famous author and a kibbutznik—or rather, ex-kibbutznik. He wasn’t kibbutz-born, wasn’t a “child of the dream”. Rather, he ran away to join Kibbutz Hulda, not far from the Latrun Monastery, after his mother’s death. It was in many ways a rejection of the right-wing scholarly nationalism of his father, uncle and grandfather. (He even went so far as to replace his surname “Klausner” with “Oz”: ”strength” in Hebrew.) He lived and worked and wrote and married and raised a family there for 30 years. He only left when his youngest son developed asthma, and doctors recommended a drier climate, so they relocated to the development town of Arad, near the Dead Sea.
A Tale of Love and Darkness doesn’t detail much of Oz’s kibbutz years, but it does offer fascinating glimpses, from this literary giant’s perspective, of how these communities were viewed in Israel at mid-century. He describes using matchsticks and other tidbits to construct imaginary kibbutz settlements as a child. He offers a comic anecdote about how he wrote a rebuttal to a newspaper editorial by founding prime minister David Ben Gurion—and how his entire kibbutz was angered at first by his presumption, until Ben Gurion writes a reply to Oz’s rebuttal and later invites him for coffee. He writes about how his father, who tried to convince him against joining a kibbutz, visits for the first time and is so concerned about fitting in and not offending his hosts that he arrives, not in his usual suit and tie, but in the rough work garb of a pioneer. He also describes the contempt in which the kibbutzniks were held by his grandfather and his nationalistic friends:

“As for the kibbutzim, from here they looked like dangerous Bolshevik cells that were anarcho-nihilist to boot, permissive, spreading licentiousness and debasing everything the nation held sacred, parasites who fattened themselves at the public expense and spongers who robbed the nation’s land—not a little of what was later to be said against the kibbutzim by their enemies from among radical Middle Eastern Jews was already ‘known for a fact’, in those years, to visitors to my grandparents’ home in Jerusalem.”

Oz’s memoir was a huge literary event in Israel when it was released, and in 2004, to coincide with the publication of this English translation, David Remnick profiled Oz in The New Yorker. At one point, they visit Kibbutz Hulda together and Oz reflects on his early years there:

“Tel Aviv was not radical enough—only the kibbutz was radical enough,” he said. “The joke of it is that what I found at the kibbutz was the same Jewish shtetl, milking cows and talking about Kropotkin at the same time and disagreeing about Trotsky in a Talmudic way, picking apples and having a fierce disagreement about Rosa Luxemburg and Karl Liebknecht. It was a bit of a nightmare. Every morning you would wake up and you were in the same place! I was a disaster as a laborer. I became the joke of the kibbutz.”

Oz’s memoir, like all his writing, is wrapped in this style of wry detachment and humourous retrospection. To Remnick, he describes his earliest years on Kibbutz Hulda as “a teen-age ‘Lord of the Flies,’ with better weather and a sensual permissiveness.” The author leads his guest around the quiet grounds of Kibbutz Hulda. Workers are in the fields. Many of the older buildings lie abandoned, as a generation of kibbutz children have not returned to their communal home. Yet, despite the decline of the movement, Oz still sees a remnant of the kibbutz philosophy, which he defended for so many years, still underpinning much of his nation:

“In a sense, the kibbutz left some of its genes in the entire Israeli civilization, even people who never lived on a kibbutz and rejected the kibbutz idea,” Oz said. “You look at the West Bank settlers—not my favorite people, as you can imagine. You will see kibbutz genes in their conduct and even their outward appearance. If you see the directness of Israelis, the almost latent anarchism, the skepticism, the lack of an in-built class hierarchy between the taxi-driver and the passenger—all of those are very much the kibbutz legacy, and it’s a good legacy. So, in a strange way, the kibbutz, like some bygone stars, still provides us with light long after it’s been extinguished.”