Trouble in the Fields 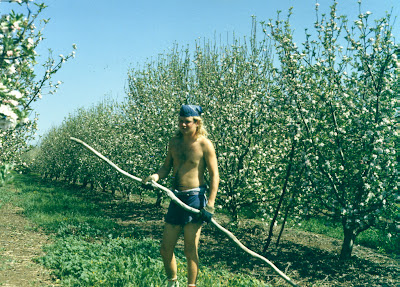 [Writing-in-progress about working at Kibbutz Shamir.]
After my stint behind the dishwashing machine, I graduated to the avocado fields. The harvest of Kibbutz Shamir’s orchards had been nearly completed by the time I got assigned to this detail, so there was only another week or two of work left. Our job was simple enough: ascend the broad-branching trees, pluck the last of the ripe fruit, and deposit the avocados into plastic buckets to be carted away to waiting tractors. …

To be scaling these trees, clambering from the top rungs of the ladder ever deeper into the nest of branches and leaves, was a new experience. I’d always been a clumsy, nervous, fearful climber as a child—not one of those kids who shimmies up flag poles and garage sidings and the tallest trees on the block, just for kicks. Gravity was not to be trusted, so I tended to keep my running shoes on firm ground. But here, in this new land, I took to the novelty of avocado picking, like I’d be born to the job. The kibbutznik in charge of the harvest nicknamed me “Monkey Man”, for my willingness (I hope—perhaps he had other reasons) to pull myself to the topmost reaches of the trunk, for my new arrival’s urge to impress, to leave no fruit unplucked, no collective profits squandered and left to rot on a distant branch.

There was a satisfaction in seeing, the next morning, sliced fresh avocados in the buffet trays of the dining hall for breakfast or lunch. This was 20 years before the “locavore” movement, before eating lightly on the earth—consuming organically grown, untravelled food, cultivated by the farmers in the neighbouring area code—became the mantra of the middle-class mainstream, even fashionably urbane, not simply hippy-headed back-to-the-landism. Here, on the kibbutz, the community had developed economies of scale to do much of that on its own. It raised cash crops for export: cotton and kiwis and apples and avocados. But like any farm, it could skim the excess for its own kitchen, and add to that bounty vegetables grown in the kibbutz gardens, meat from the cattle operations, honey from its apiaries, eggs from the chicken sheds. Even the table cloths and dish rags came from the kibbutz’s “Shalag” factory, which spat out reams of the non-woven fabric for a variety of uses. Our meals shrunk the radius of the 100-Mile Diet down to 10 miles, often closer. We pulled our own food from the orchards beyond the barbed wire perimeter and the tilled acreage in the valley below. I felt like a farmer at last.

The fieldwork, no matter how sweaty and arduous, held a romantic appeal to international volunteers, who were largely city kids like myself. It fit the vague, sepia-tinted image we had of kibbutz life. It allowed us to PhotoShop our faces into the collective portrait of pioneer life, to assume the role of hardy turf-breaker, even if our “pioneering” consisted of boozy three-month stopovers on the Mediterranean backpacking circuit. It was harder to sustain that image when you were scrubbing pots or cleaning toilets or a cog in a noisy factory. Manual labour, on the other hand, as long as we had a return ticket—that we could romanticize.