Review: The World of Yesterday 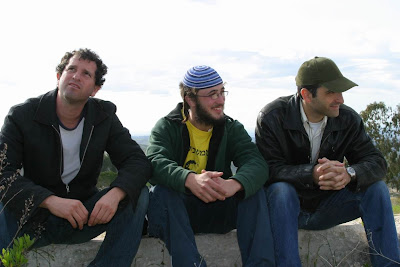 I’ve had a DVD copy of Did Herzl Really Say That? (ordered through Ruth Diskin Films) for six months now but only got around to watching it last week, in part because I wasn’t sure (from the back cover blurb) what the film was exactly about. It turns out that Herzl is a documentary TV series (which was nominated for an Oscar) co-hosted by two young Israeli academics (science historian Dr. Oren Harman and biologist Dr. Yanay Ofran), who travel through Israel and beyond to explore (and argue about) issues of history, politics, culture and identity.
The episode I’d ordered (called The World of Yesterday) looks at the evolution of both the left-wing secular kibbutz movement that helped to found the nation of Israel and the right-wing settler movement that built new towns, after 1967, in the West Bank and Gaza. At first glance, these two communities couldn’t be farther apart in ideology, and yet Harman and Ofran find and discuss interesting parallels between the “pioneers” on the far-left and the far-right of the political spectrum.
What most intrigues the curious hosts is the challenge of sustaining a revolution after the first generation, and how the second and third generations that follow these pioneers either angrily reject their parents’ values, become more radical, or learn how to adjust their own ideologies to the here and now. Harman and Ofran talk with three generations of kibbutzniks on Kibbutz Sha’ar Ha’Golan (including Aviv Leshem, the spokesman for the entire Kibbutz Movement, who I also interviewed several times).
“Most of our dreams came true,” says one elderly member, “except for creating a new man.”
(One host paraphrases a nugget of wisdom from author Amos Oz: Ideological movements carry two dangers: one is that their dreams will be shattered; the other is that their dreams will come true. The Kibbutz Movement suffered both.)
They also visit an urban kibbutz in Migdal HaEmek and talk to several of the young members, who have become radicalized again in the third generation, rejecting the bourgeois country kibbutz of their parents’ generation for social and education work in urban environments. “Most of what we want to do is in the city,” says a member. “Our mission is here.” One host can’t contain his bewilderment at a kibbutz without farm land or  the other traditional trappings of kibbutz life that still talks in the rhetoric of the socialist Internationale: “It looks like a parody!”
The spirited, irreverent, opinionated attitude of both hosts makes the documentary especially watchable, as they challenge the statements of their interview subjects and then argue about the issues amongst themselves. They are interested in making connections, teasing out new ideas and testing the contradictions in the lives of their subjects rather than just playing fly on the wall like traditional documentary-makers.
At one point, they sit down and talk with a young right-wing religious settler, who makes increasingly provocative statements about how he plans to build a house on the hill and take potshots at passing Arabs or even cut one up with a knife. The hosts stand up in disgust and leave. “That’s enough,” one says. “We don’t need to listen to this.”
“So you are carrying out the vision of the kibbutzniks?” they ask another settler, an older one, less violent but just as ideological in her mission to settle Judea and Samaria.
“Of course!” she replies.
“This is pioneering!” says another second-generation settler. “We are the new pioneers!”
The older kibbutzniks on Sha’ar Ha’Golan can only shake their head at the settlers’ responses. “We came here with a humane approach,” says one. “No movement in the world has achieved so much in people’s lives as the kibbutz.”
When the hosts press further, one kibbutznik admits he can see faint similarities in the challenges faced by the two movements to sustain their pure, utopian vision of the just life in Israel. “I am ideologically opposed to them,” he says, “but I can sympathize with them.”
In the end, both hosts admit that they could never give up their own busy, rich urban lives for the sacrifices and ideological resoluteness of kibbutz life—let alone that of the settlers. Still, they end their documentary with a quote from George Bernard Shaw that sympathizes with the sometimes quixotic, sometimes misguided and sometimes noble goals of utopian movements: “The rational man adjusts himself to the world. The irrational man adjusts the world to himself. Progress in the world depends on the irrational man.”