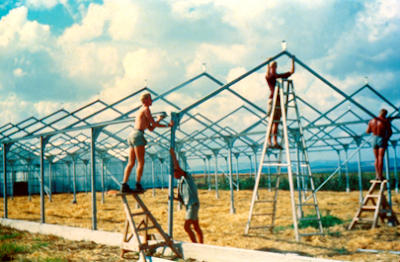 If it walks like a kibbutz and talks like a kibbutz—or rather, looks like a kibbutz and works like a kibbutz—then surely it must be one, no? That was the question I puzzled over, on my recent trip to Israel, when I stayed for four days and nights on the fascinating community of Nes Ammim.
First a correction: In a blog post from the road, I hastily described Nes Ammim as a “German-run kibbutz”. People there, who had googled my blog, quickly corrected me. Yes, there are Germans among the leaders and volunteers. But Nes Ammim was founded, in the early 1960s, by Dutch and Swiss citizens, led by Dr. Johan Pilon from Holland and Dr. Hans Bernath from Switzerland, both physicians working in the Galilee. Americans volunteers arrived later, as well as a steady contingent of Germans—but only after German nationals were finally permitted to visit Israel. (A basic history can be found here.) But German-run? Hardly!

My confusion, perhaps, is understandable. Nes Ammim confuses the basic definition of a kibbutz. When most people picture a kibbutz, they imagine a rural settlement of secular Jews, founded by blue-shirted pioneers inspired by the ideals of utopian socialism. Marxist farmers with bronzed arms and short-shorts. (Yes, there are a handful of religious kibbutzes, but they never played as large a role—except for Kfar Etzion—in the mystique of the kibbutz movement.) People never imagine a village of blonde Christians growing roses.

Nes Ammim isn’t even on the radar among kibbutzniks within Israel. When I told Israeli friends and acquaintances that I was visiting a kibbutz of European Christians, they gave me incredulous looks, as though I’d said I was staying with the Tooth Fairy: they had never heard of Nes Ammim. In fact, after four years of intense research into utopian communities throughout the region, I only stumbled across the website for this community by accident, a couple of months before visiting.
On my first afternoon in Israel, in late November, as I entered the grounds of Nes Ammim, it certainly felt like I had arrived at a kibbutz. There were the surrounding fields, the gate (open) and guardhouse (empty), a swimming pool and a carpentry shop, a dusty ring road and winding pedestrian paths, the rudimentary tin-roofed volunteer cabins, with everything focused on the the dining hall and office complex at the centre of the property. The kitchen has a bit of a split personality on Nes Ammim. Most of the kibbutz’s revenue now comes from its guest house, popular with Israelis escaping the summer heat and Europeans escaping their own winter, so the kitchen prepares food for tourists in the restaurant as well as residents and volunteers in a more barebones, buffet-style communal dining hall.
The original kibbutz movement had two goals: establish the borders of a future state in Palestine for the Jewish people (ie, Zionism) and create a new model for living in equality (ie, utopian socialism).
So what was the founding vision of Nes Ammim? Obviously not the first: Israel existed by the time the idea for Nes Ammim arose. And the second? Perhaps only tangentially—certainly the spirit of radical sharing was in the air at the time. But the founders of this unique community had a more specific goal in mind: to create a community within the young state of Israel that would help Europeans and Christians, and especially European Christians, emerge from the dark shadow of the Holocaust, from millennia of pogroms and anti-Semitism, and heal the deep chasm of suspicion with the Jewish people. It would be a new community, modeled on the successful Jewish invention of the kibbutz, where dialogue groups and encounter sessions between leaders of the two religions could take place. The name of the kibbutz—Nes Ammim—means “a banner for the nations” and comes from the Book of Isaiah.  It refers to God’s promise of everlasting peace in paradise for all the people on earth, which will be announced by such a sign.
The idea for Nes Ammim earned the support from kibbutz leaders (it would become an associate member of the movement) and Prime Minister Levi Eshkol. However, influential rabbis worried that Nes Ammim would be a front for evangelizing Christians trying to convert Israeli Jews. They opposed the plan—and the community—for many years. Once rumours circulated, thousands of people in nearby Nahariya marched in protest, too. The founders only got government permission to settle the property, purchased from a Druze sheikh, after they signed an agreement that promised never to proselytize. Every new volunteer must sign a similar “no-preaching” contract.

In 1963, a Swiss family drove a rickety old school bus with faulty brakes—a “gift” from Israeli friends—off the heights of Nazareth and across the untilled fields of the property. They parked on a hill: the bus would become the first building of Nes Ammim. It remains today as a museum and a reminder of its ad-hoc origins. Slowly, residents and volunteers who moved to and lived on Nes Ammim earned the trust of their Jewish neighbours, in part by never abandoning the settlement during the six wars that threatened the nation. Eventually, Germans—who weren’t even permitted to visit Israel during its early years—were permitted to stay as volunteers in the 1970s.

Nes Ammim developed a communal economy around avocado orchards, olive groves and its famous “glass houses”: greenhouses that deployed the horticultural expertise of Dutch residents to grow and sell roses. Bouquets of Nes Ammim roses became a sought-after decorative element at receptions for visiting foreign dignitaries. While the settlement was always intended to be permanent, residence there wasn’t. Leaders stayed on Nes Ammim for perhaps five or six years at most and then returned home. Volunteers usually lived there for a year or less. The kibbutz followed this pattern for years, slowly growing, adding buildings and residences, while new people cycled through and gave it energy and life.
Like the rest of the kibbutz movement, though, the turn of the millennium saw Nes Ammim suffer an identity crisis. The community could no longer compete with cheap flowers imported from Africa and had to shut down the glass houses—for decades, the signature feature of its economy. The violence of the Second Intifada and the Second Lebanon War cut into bookings at the guest house.The population of European families moving there had declined and many of the houses were being rented out to Israeli tenants.
And there were existential questions, too: What was the purpose and value of this place, 40 years after its founding? The European attitude toward the state of Israel—once wracked with guilt, now more aligned with the plight of the Palestinian people—was also shifting. How should Nes Ammim react to these changes? Could it evolve with the times?
I had walked unknowingly into the midst of this debate. For the last few years, Nes Ammim has focused not only on dialogue work between Christians and Jews, but also between Palestinian Arabs and Israeli Jews. The site of the kibbutz, leaders realized, could be used as neutral ground (or as neutral as any ground gets in Israel) for different groups within the country to meet and talk and build trust.
Nes Ammim had just broken ground on an even more ambitious project. Like almost every other kibbutz in the country, they are building a rural subdivision to be marketed to outsiders. Unlike almost every other kibbutz, Nes Ammim plans to use a new law that allows community settlements, in the country’s north and south, to interview and select residents—to screen newcomers, in other words—as a way to populate a mixed neighbourhood of Arabs and Jews, much like Neve Shalom/Wahat-al-Salaam. (This law has proven controversial, and come under legal challenge, because it has been used to exclude Arab residents interested in moving into Jewish settlements. Of course, membership by vote has been the kibbutz model from the very beginning.)
Not everyone I spoke with at, or associated with, Nes Ammim was keen on these changes. Some doubted that the community would attract enough Jewish residents to balance the population of this new neighbourhood. Others worried that Nes Ammim would lose the European character that had made the place unique, and with it, the focus on healing the division between Christianity and Judaism, between modern Europe and modern Israel, which has only grown in recent years.
The young Dutch and German volunteers I met on Nes Ammim, however, seemed excited by the prospect of change. Their experiences on the kibbutz had been enriched, they told me, by the opportunities to see and hear about the complex nature of Israel from multiple perspectives: to learn Hebrew from native speakers, to tour the Holocaust Museum at the nearby Ghetto Fighters Kibbutz, to teach English to kids at the next-door Arab village, to meet school groups from both sides of the conflict, to visit the West Bank, to realize how many shades of grey exist behind the black-and-white stories of the region they were fed by the media back home. (I was envious of the rich experience these volunteers were getting on Nes Ammim, a far more intimate and honest look at life in Israel—especially the mixed Arab-Jewish region of Western Galilee—than 99.9% of foreign visitors will ever encounter.)
Nes Ammim was a place, sleepy as it might seem, that will always attract a whiff of controversy. How can you bring different religions together and not expect some friction? Perhaps that tension between its harmonious aspirations and its contentious reality is best symbolized in the sculpture that rests in the foyer of the kibbutz’s “church”. The building itself has been largely stripped of evidence of any faith or denomination. No cross, no icons, nothing but chairs facing a bare altar. The entrance, with a koi pond and rock garden in its centre, has the aura of a Zen Buddhist sanctuary more than anything else.
Then your eye is drawn to the sculpture in the pond, like a nativity scene floating on a disc. Three sets of ten figurines face a central pillar with three doors. The terracotta-coloured figures are arranged in a V-shaped 1-2-3-4 pattern, like bowling pins, aimed toward the three-doored hub. A closer inspection reveals the particulars of each faith in the figurines’ genuflections: Muslims prostrate on the ground, Christians kneeling, Jews—a minyan of them—standing, heads bent, holy books in hand.

The symmetry of the design is meant, of course, to suggest a harmony between these faiths, a place of coming together. It isn’t always read that way: Why does one door look more open than the others? What is meant by the hierarchy of the figures’ stances: standing, kneeling, prone? And as a few visitors have asked: Where are the Druze? The Ba’hai? Aren’t there more than just three faiths in the area?

I was told that the kibbutz members had to erect the low wire barrier that surrounds this installation because curious observers and anonymous sculpture critics, either by accident or design, kept inspecting the set-up and knocking over the figurines. You can see where the heads of decapitated worshippers have been glued back on. So now, in Nes Ammim, a place of faith and healing, a Christian utopia for Jews and Muslims, a fence must guard even this representation of their equality before the Almighty, this microcosm of the community’s higher ideals.
The sculpture is, quite literally, a “floating signifier”—a symbol even more symbolic than it was originally intended.