RIP: A man of peace 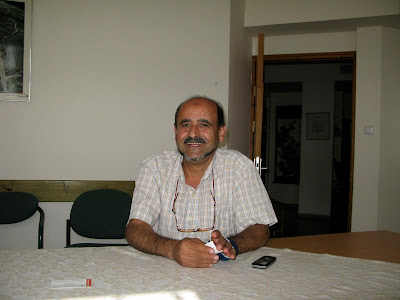 It was great shock that I read, via Twitter, of the death (at age 60) of Abdessalam Najjar, one of the founders and leaders of Wahal-al-Salam/Neve Shalom—the village of Palestinians and Jews located near the Latrun Monastery. I’d interviewed him, in 2010, and found him a remarkable man: super-smart, funny, wise, an engaging storyteller, and a committed man of peace. I spoke to him for more than an hour, and knew throughout talk that I had to try to squeeze as many of his words as possible into my book (should I ever finish writing it).

Born in Nazareth, Abdessalam—perhaps more than anyone I met on my different trips—exemplified the utopian spirit of the original kibbutzniks. He had taken the path less travelled and chosen to live, in peace if not always harmony, with the people who he’d been taught were his enemy. He had helped to create in the “Oasis of Peace” a model that proved that Arabs and Jews could sit together and talk about their different situations, their competing narratives and grievances, could live together, could go to school together. That the walls of hate (and concrete, too) that had been erected too hastily could be pulled down, brick by brick.

I included a short transcript from our interview earlier on my blog. But Abdessalam had so much more to say—to me, to the world. It is a profound loss to his homeland and for the hope for peace over violence in Israel and Palestine.