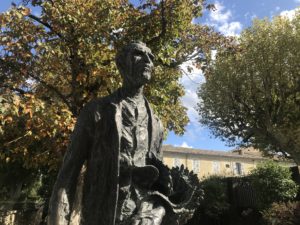 We are now in our third stop in France. Our visit began with a brief visit to sunny, stylish Nice. We tried two delicious local foods in Nice: socca, a chickpea pancake, and Pissaladière, a type of Provençal open tart resembling pizza that usually includes onion, anchovies, and/or olives. We then spent three nights in Cassis, a picturesque seaside town where we hiked the Calanques, narrow steep-walled inlets. Our somewhat challenging and rewarding trek ended included a frigid swim in breathtakingly clear Mediterranean waters.

It is interesting being able to communicate more effectively. Locals speak to me and I realize that I can understand them—albeit it takes me a moment or two. I found yesterday that I was wondering “what is that bruit?” Words are coming back covered in cobwebs: voisin, propre, brosse, tapis, gaspillage, usine. My accent is fairly tragic, but we are no longer in places where English is widely spoken, so people are not switching when I use French.

We are now in Saint-Rémy-de-Provence, and there is much to do here, though we are all winding down somewhat, missing friends and family and weary of the packing and unpacking. On our first full day here we walked to Glanum, a local archaeological site founded by the Gauls, then a Hellenistic period and finally the Romans. It is enjoyable to roam around en plein aire.

Yesterday, we visited the Saint Paul de Mausole, the Romanesque monastery where Vincent Van Gogh spent a year of his life as a psychiatric patient and produced an astonishing number of works while there, including The Starry Night. The institution still serves local residents and provides programs to help them make art—I was tempted to buy some that was on display.

I was surprised to learn that Van Gogh sold only one painting during his lifetime. I was feeling wistful, and it made me sad to consider how much more content and stable he perhaps could have been had he benefitted from modern pharmaceuticals. St. Paul’s sounded (and, to be honest, made themselves sound) fairly progressive for https://davidleach.ca/wp-admin/media-new.phpVan Gogh’s times though they still used therapies that are horrifying today, such as forced feeding and regimes of hot and cold baths. 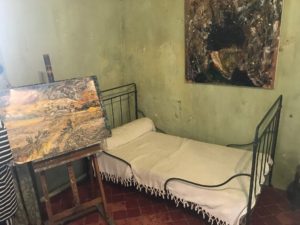 It was moving to stand in Van Gogh’s former bedroom, look out the window and see those colours and the landscape—the golden yellows, the olive trees, the wheat, the hills—that inspired his greatest works. As we walked back to town, I mentioned to A.J. and Briar that I hoped the stigma of mental illness is successfully reduced during their lifetime. We are far from there yet. 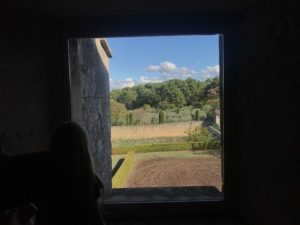 Moving on to lighten the mood of this blog: we have an outdoor ping-pong table at our AirBnB. The condo is spacious and pleasant—especially after the cramped quarters in Cassis, where we occupied a tiny, eccentric main floor space between two restaurants.

Ping-pong remains the one game involving hand-eye coordination that I can actually play. I am not allowed to reveal the details of which individuals I may have beaten in ping-pong combat. The property also has an outdoor pool, walnut trees and fragrant flowers and shrubs that attract a very strange moth-hummingbird, a creature new to me. It looks just like a tiny hummingbird, but is technically an insect. Very étrange!