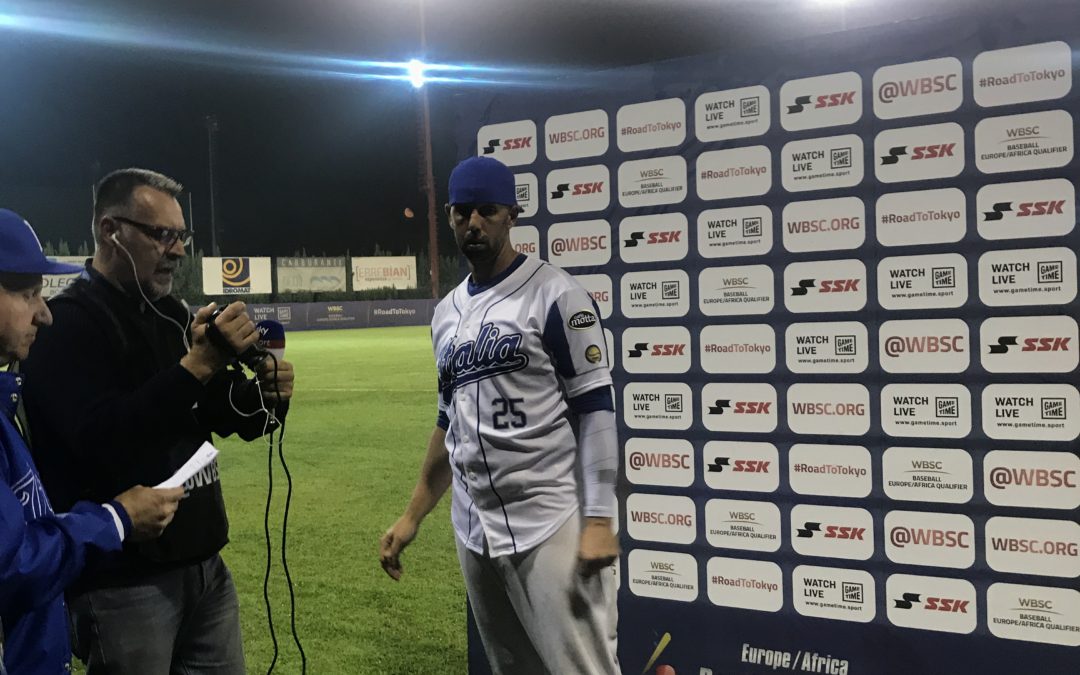 Bologna is the “business” part of our trip — 5 days of baseball, for a potential article or book about the the internationalization of the sport.

The World Baseball Softball Confederation have organized the Europe/Africa Olympic qualifiers, split between stadiums in Bologna and Parma, here in Italy. Six teams qualified, five from Europe (Italy, Netherlands, Spain, the Czech Republic, and Israel) and one from Africa (South Africa, who I’d seen decisively clinch their berth at the African Championships in May).

This tournament is a round robin with no playoffs. The top team will earn one of only 6 spots at the Tokyo Games next July. The second place team will hang on for a chance at a final play-in berth next spring… although likely against very good squads from the Americas and Asia. The other four will have their Olympic dreams end.

I’d gambled staying in Bologna. Unfortunately, more of the games (and more that I’d like to see) are in Parma, which is only 30 minutes by fast train but tough to get to and back again for games that begin at 8pm and the last train that leaves at 11:30pm.

So while I wanted to see Italy play South Africa on Wednesday night in Parma, instead I attended Spain vs. Israel here in Bologna. It turned out well. The Parma game got rain delayed with it tied 4-4 in the 5th and then moved to Friday morning for completion. The rains held off here in Bologna, and Israel — with a roster of American-born players, many rushed into citizenship before the European championships a few weeks ago — won a pitcher’s duel with a 3-0 win. Danny Valencia (former Blue Jay) led the way with a 2-run homer and a sac fly.

The next day, we all attended the afternoon (1:30pm) game between South Africa and Spain. Another tight pitcher’s duel got blown open with a 5-run fifth inning by Spain. who won 7-1. I returned alone for the evening game, with Italy facing the Czech Republic. The stands were closer to half full, after the sparsely populated earlier games I’d watched. The Czechs scored first, but Italy quickly tied it 1-1 with a Chris Colabello (another former Blue Jay!) hitting a sac fly. He added 3 more runs with a homer in the third and Italy cruised to a 5-1 win. More shocking, in the other night game in Parma, Israel scored 6 quick runs and beat the top-ranked Dutch 8-1 to upset predictions of who would earn the berth in Tokyo. 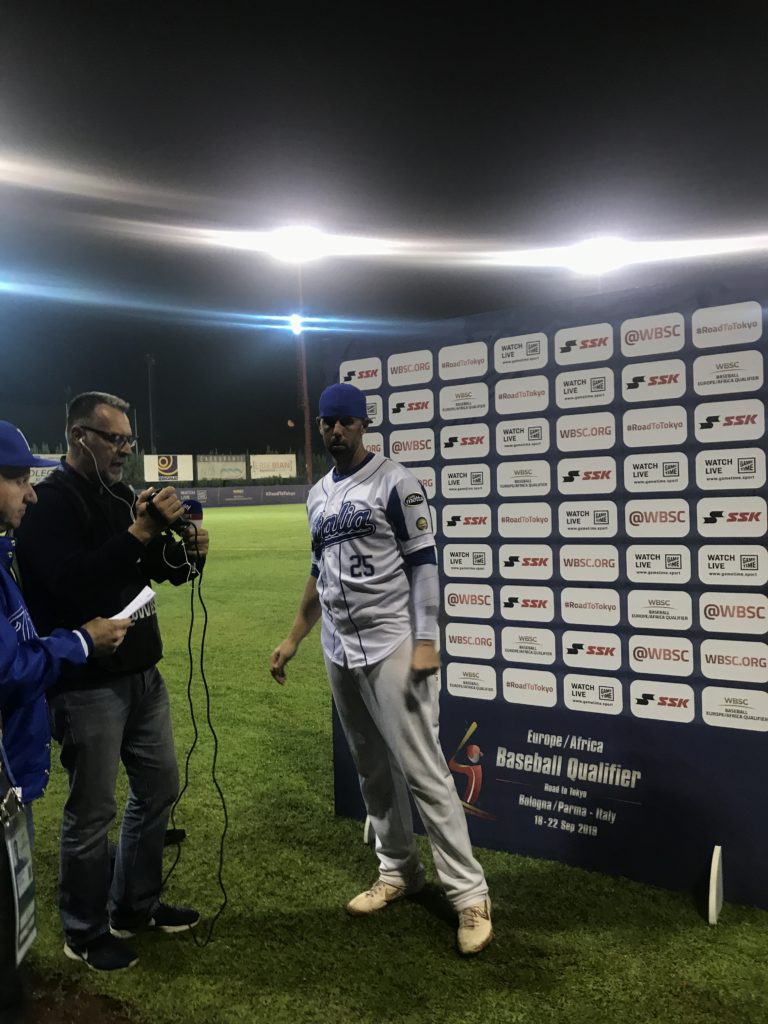 Chris Colabello after Italy’s win over the Czech Republic

The next day, alas, the big games were in Parma, so we did a sojourn into the old city of Bologna (to visit a zoological and anthropological museum and buy AJ the rain jacket he forgot to pack!) and then I watched the erratic live streams of the key matches back at our suburban apartment in Bologna.

Italy won the rain-delayed game (starting at 11am) in weird fashion, scoring 6 runs in the top of the 10th inning (world baseball rules put runners on 1st and 2nd base in extra innings, but 6 runs is still a lot!) and then ending the game in the bottom of the inning with a dubious triple play (off the first batter!) when Rowan Ebersohn fouled a pitch off home plate that appeared to then hit his leg and roll into fair territory. The umpire didn’t see the ball hit his leg, the Italian catcher threw to third, who threw to second, who threw to first, and a video review was disallowed (you can’t review fair/foul calls) so the missed call stood. Game over.

That set up the biggest game of the tournament so far: Italy vs. Israel in Parma in a battle of undefeated teams. The winner would control their destiny. Israel flirted with danger, as Italy kept putting runners on base early. But Italy left 10 runners on base over the nine innings and had their hopes fall to pieces in the top of the 8th, after Chris Colabello got beaned and had to leave the game in the bottom of 7.

The dominant Italian pitcher Luis Lugo was removed after beaning the first Israeli batter (perhaps in retaliation), and then Pat Venditte (famed ambidextrous former major leaguer!) struggled to shut down the inning and had to be removed. A squeeze bunt muffed by Colabello’s replacement at first base gave Israel a 3-2 lead. Another muff by the shortstop loaded the bases. And then three straight singles by Israel added 5 more runs.

Italian fans were stunned. And the Italian team could muster nothing in their final two innings. Team Israel had taken control of the tournament and only needs to win one of its games versus the Czech Republic or South Africa (both lower ranked teams) to secure their ticket to Tokyo. The final game in Bologna, with Italy versus Netherlands, had promised to be the big match. Now it looks like it might be the playoff for second place and a last shot at the Olympics.