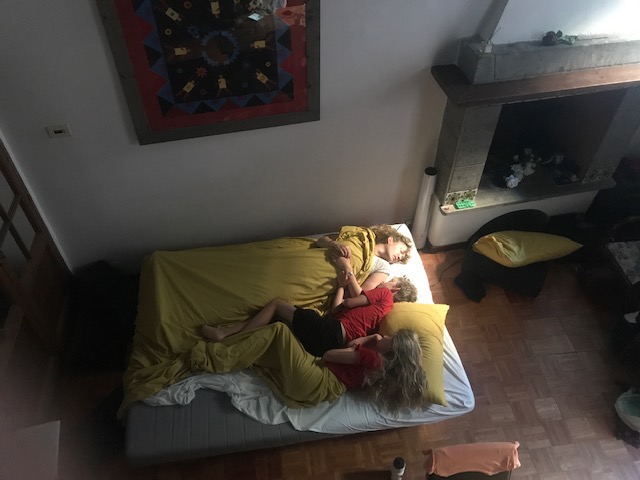 We are winding up our second week of travel and staying in our third AirBnB or la nostra casa per le vacanze (our vacation house). All have had their pluses and minuses, but we’ve enjoyed all three.

In Rome, our apartment on the ground floor of an apartment on Via Panisperna was very old and interesting. The building dated back to 1741 (!) and had stone steps leading up to a loft bedroom (we were worried about these steps since the rail began at the perfect height to trip someone in the night). Rome was hot—to us at least, reaching more than 30 degrees Celsius each day, though far cooler than it had been. The apartment was dark and relatively cool. It had high ceiling made of vaulted wood, with the only windows at the top of the kitchen, which was a tiny galley room with a hot place. Every place we have stayed has had a tiny Italian coffee maker for espresso, and A.J. became expert at making them for me. It had some strange features, including a bizarre hair dryer attached to the wall and a tiny combination washer-dryer (all in one) that sat in the bathroom area. It came with five pages of instructions, but reader, I figured it out and did not flood the apartment. The street was steps from wonderful restaurants (Le Tavernelle, which we loved) and within walkable distance of the coliseum.

Our Florence place was on a lovely cobblestone street in an tiny apartment that apparently once housed a famous artist (this story was unclear). We could see paint through the walls, that someone had once painted them, which just added to the cheerful mystery of the place. It was on Via D’Ardigilone, over the bridge from the main tourist area in Oltrarna (over the Arno River). It was amazing narrow, cheerful green shutters, décor all in bright, primary colours, mostly IKEA. We slept on bunk beds at the back of the apartment and the shower was in the middle of the bathroom with two curtains to separate it from toilet and bathroom sink. It was smartly designed to make the most use of the space. The kitchen sink and stove (no oven again) was in a tiny alcove. Not the greatest for a tall guy like David. It had a lot of personality and it was not a lot of space for all of us, but we enjoyed it there. 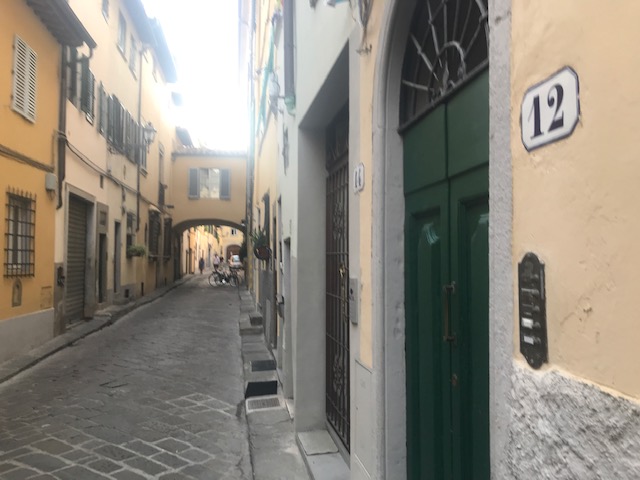 Our apartment in Florence 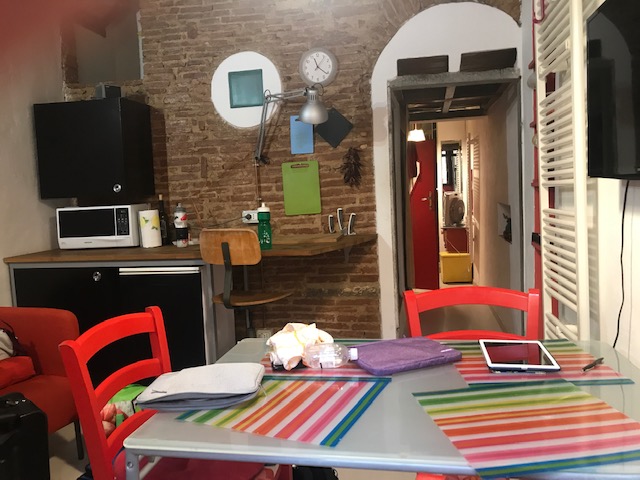 In Bologna, we are staying in a residential area about 40 minutes’ walk from downtown Bologna and 25 minutes from the baseball stadium where David is a attending the Europe/Africa world qualifier. The apartment has a pull-out bed in a small kitchen, a balcony where we can hang laundry (and Briar can watch neighbourhood dogs coming and going from their own balconies). It is newer and stylish, all in neutral colours of white and beige. It is nice to have a proper standing shower with a glass door, and it is bright. It even has an oven, though very few dishes and kitchen tools. We were only given one key, which has presented some challenges. It is also near a big, local park that is very busy with residents playing soccer, volleyball, tennis, basketball jogging and even learning tango dancing. The kids and I have gone running there and enjoyed the neighbourhood vibe. 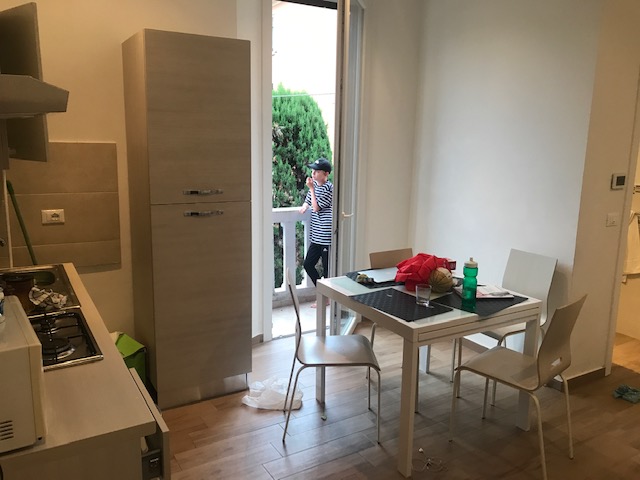 Airy and bright in Bologna