I had never imagined that Briar would be obsessed with wild boars. But she was. We stayed six nights on an olive farm near Montegonzi, Tuscany, home to black scorpions and wild boars. There was olive oil to sample, a pool surrounded by olive trees and three dogs on site—including a sleepy-eyed lumbering Newfoundland named Nelson. We were a 25-minute drive from any store, but close to winding roads, rolling hills, medieval castles and many vineyards and olive farms.

The highlight of the kids’ stay in Tuscany will surely be the Tuscany cooking class they attended in a rural farm or podere, along with their dad and a couple from New York. I chose to roam the hillsides, visiting a convent, walking past tiny chapels and shrines and watching grapes being harvested for the famous Chianti wine.

We returned to busy streets for a day trip to Siena, with its most beautiful medieval square, the Piazza del Campo. We toured their ancient hospital that cared for the poor and abandoned—Santa Maria Della Scala, which was a captivating combination of high art in frescos and bizarre underground tunnels with bones and artefacts.

Briar never did see a wild boar while we were in Tuscany, though she heard their howling guttural sounds at night—which incensed the dogs. She will have to return some day. 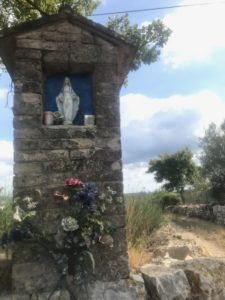 A shrine by the roadside in Tuscany.

From Montegonzi we drove to Piombino and took an hour-long ferry ride to Rio Marina and then Porto Azzurro on Elba Island on the Tyrrhenian Sea. It is apparently chock-a-block with tourists in July and August, but the ferry ride over had the air of an empty Carnival cruise ship. Porto Azzurro was not empty—there were quite a few German families, particularly in the campgrounds—but overall the village of 3,700 or so residents was peaceful and welcoming in its shoulder season.

I had two particularly wonderful runs, one along a coastline trail that took me past three beaches: Barbarossa, Reale, and Terranera. Elba is known for its beautiful beaches, but there was more here, for example a Spanish fortress, now a prison, that looms over the cliffs, and minerals—evident in the sparkling black sand of Terranera. Elba’s mining history apparently dates back to the Etruscans, one of many peoples who took turns ruling and living on Elba. 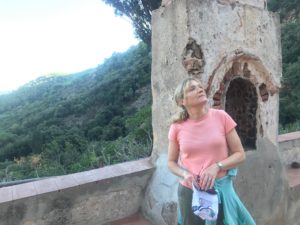 Standing at the sanctuary.

Another run took me to Spiaggia di Barbarossa then up a long, winding road to a pine tree called the pino monumentale, or nonno (grandfather) pino, said to be 400 years old. From there I ran to a hidden cliff top sanctuary, the Sanctuario della Madonna di Monserrato. The stone church in the cliffs was commissioned in 1606 by the Spanish governor Pons y Léon to worship the cult of the Black Madonna (in Spain worshipped at the Montserrat Sanctuary).  I found myself completely alone on the path and at the top. The chapel door was locked, but the view of the ocean, the town below, and the strange, otherworldly stone chapel was eerie and exhilarating. 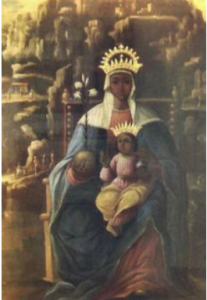 The painting of the Black Madonna seen in the sanctuary.

David and I later hiked to the sanctuary another afternoon. The chapel was again closed, but we peeped through the keyhole to glimpse the altar with the painting of the Madonna. Taking the path down to real life, we agreed we had seen something unusual and special.